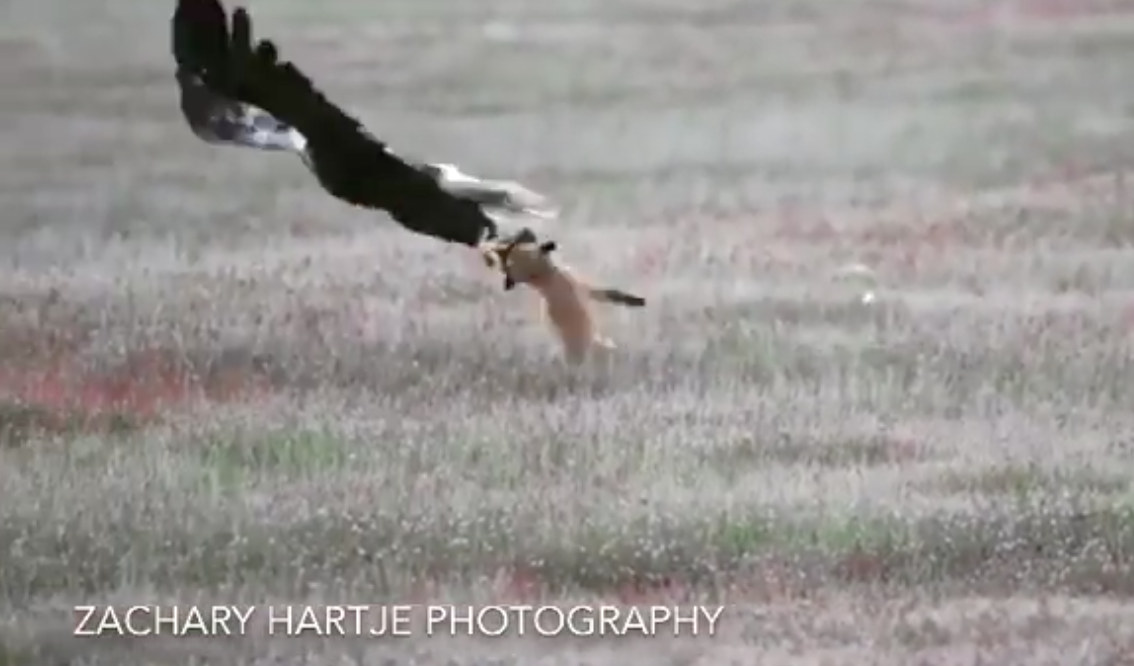 An eagle taught a young red fox a lesson in nature's food chain when a rabbit the fox held as prey was snatched away by the much larger bald eagle. Video and photos showing the animals in an epic 8-second tug-of-war where the fox went airborne. A detailed blog post about the "dramatic art of thievery" has also been going viral.

The dramatic encounter that took place at San Juan Island National Historical Park in Washington was caught by photographers Zachary Hartje and Kevin Ebi, who wrote the blog post. According to Ebi, he had spent the whole day taking pictures of the young foxes, called kits, play on a prairie on the island. Close to sunset, the kits started to hunt and one of them managed to snag a rabbit's foot.

"A red fox caught a rabbit and was carrying it across the meadow," Ebi wrote. "I panned my camera with it to capture the action. Then behind me, I heard the cry of a bald eagle. I turned around and saw it approaching fast. I knew it wanted the rabbit."

Hartje's video shows the fox trying to run away before the eagle swoops in and grabs it.

"To my surprise, the scene was even more dramatic than I expected." Ebi wrote. "I thought the fox would drop the rabbit, giving the eagle an easy dinner. Instead, the fox, with its jaw still clenched on the rabbit, inadvertently got snagged by the bald eagle. The eagle lifted the young fox and rabbit into the sky triggering an even more dramatic struggle."

Ebi says the eagle transferred the rabbit to its right talon and eventually let the fox go. The fox fell from enough height to trigger a small dust cloud when it hit the ground.

But not to worry, the fox emerged "fine," according to Ebi.

Rabbits aren't the first choice of food for these foxes on the island, Ebi says. They prefer insects, berries and voles –– but the last two have been displaced by rabbits. As for the park's birds, most of their diet consists of fish and other birds.