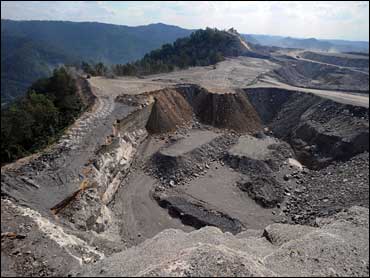 The Environmental Protection Agency is putting on hold hundreds of mountaintop coal-mining permits until it can evaluate the projects' impacts on streams and wetlands.

The decision was announced Tuesday by EPA administrator Lisa Jackson. It targets a controversial practice by coal mining companies that dump waste from mountaintop mining into streams and wetlands.

It could delay 150-250 permits being sought by companies wanting to begin blasting mountaintops to access coal.

Those permits are issued by the Army Corps of Engineers, an agency that has been criticized by environmental groups. The Corps has been sued for failing to thoroughly evaluate the environmental impact of mountaintop removal, during which forests are clear-cut and mountaintops are blasted apart to expose coal seams; the rock and dirt left behind is dumped into adjacent valleys, affecting the course and health of waterways.

Under the Clean Water Act, companies cannot discharge rock, dirt and other debris into streams unless they can show that it will not cause permanent damage to waterways or the fish and other wildlife that live in it.

Last December environmental groups sued to stop the EPA from changing a rule which they said kept mining waste from entering mountain streams, when the Bush administration announced it was revising federal prohibitions against mining activity within 100 feet of a stream.

Last month, a three-judge appeals panel in Richmond, Va., overturned a lower court's ruling that would have required the Corps to conduct more extensive reviews. The appeals court decision cleared the way for a backlog of permits that had been delayed until the lawsuit was resolved.

The EPA's action on Tuesday leaves those permit requests in limbo a little longer.

"If the EPA didn't step in and do something now, all those permits would go forward," said Joe Lovett, executive director for the Appalachian Center for the Economy and the Environment. "There are permits that will bury 200 miles of streams pending before the Corps."

Carol Raulston, a spokeswoman for the National Mining Association, said further delays in the permits would cost the region high-paying jobs. "This is very troubling, not only for jobs in the region, but production of coal generally," said Raulston.

The EPA also denied two permits the Army Corps of Engineers was planning to issue that would allow companies to fill thousands of feet of streams with mining waste in West Virginia and Kentucky.

The agency said the projects could damage aquatic resources, and that "the direct and cumulative impacts from this and future mines will be persistent and permanent and can not be sufficiently or effectively compensated through the proposed mitigation."