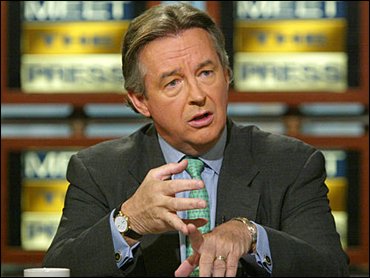 The former diplomat whose wife's identity as a CIA officer was disclosed by the Bush administration said Sunday that the leak has put her life in danger, and the government is not protecting her.

"There have been a number of other people who've come out and suggested that perhaps this does make her a target," Joseph Wilson said.

"We, of course, as a consequence of that, have begun to rethink our own security posture," he told CBS News' Face the Nation.

Wilson said it was his position on Iraq that prompted the leak, now the subject of a Justice Department investigation. The White House faces a Tuesday deadline to turn over documents that might help the investigation.

Wilson complained that "nobody has offered security from the government, although my wife is a long-standing U.S. government employee."

Wilson's problems with the administration began in 2002 after he was sent to Niger, a major exporter of uranium, to investigate a report that Iraq had sought uranium from that African country to reconstitute President Saddam Hussein's program to develop nuclear weapons.

Wilson reported that he found no evidence to support the allegation, but it nevertheless appeared in President Bush's State of the Union address in January, quoting British intelligence agencies. Because of Wilson's and other findings, officials later said the 16-word reference should not have been in the speech.

"At that time, there were a lot of analysts who were speaking anonymously to the press about any number of issues related to the intelligence that undergirded the decision to go to war," Wilson said on NBC.

"I felt that…however abominable the decision might be, it was rational that if you were an administration and did not want people talking about the intelligence or talking about what underpinned the decision to go to war, you would discourage them by destroying the credibility of the messenger who brought you the message.

"And this administration apparently decided the way to do that was to leak the name of my wife," Wilson said.

Sen. Chuck Hagel, a senior member of the Senate Foreign Relations Committee, was asked on CBS whether the government should provide protection for the Wilsons.

"If there is the least possibility, most remote possibility, of her life being in danger, then the government owes that person protection and security," said Hagel, R-Neb.

According to The New York Times, Wilson's wife was apparently a "Noc," an operative with "nonofficial cover." While many CIA operatives work under the guise of another U.S. agency, like the State Department, Nocs pose as private citizens, often businesspeople. With less official cover than other spies, Nocs can be more vulnerable to reprisals from foreign governments, the paper reported.

The Justice Department probe began after the CIA reported the possible leak of the covert operatives name, which may have violated a 1982 federal law barring the identification of undercover agents. Besides requesting documents from White House and CIA staff, the Justice Department has also told the departments of State and Defense to preserve any records.

Democrats have asked Attorney General John Ashcroft to appoint a special counsel to run the probe, citing possible personal ties between the attorney general and the White House staff involved.

One key White House aide, top strategist Karl Rove, has links with Ashcroft going back to 1994, when Ashcroft's Senate campaign paid Rove's political firm $300,000 for campaign work. Rove donated $1,000 to Ashcroft's 2000 Senate campaign — one of only five candidates Rove supported with donations from 1997 to present.

Wilson originally blamed Rove for the disclosure, then backed off, saying that Rove had merely condoned the leak. The White House denied any involvement by Rove.

During his appearances Sunday, Wilson insulated Mr. Bush from any direct blame. While he was angry at the White House, Wilson told, "I do believe, however, that the president would never have condoned or been party to anything like this."