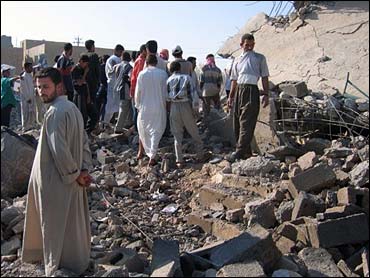 The new U.S. ambassador expressed horror Tuesday at the level of violence in Iraq and said Islamic extremists and former members of Saddam Hussein's outlawed Baath Party were using Iraqis as "cannon fodder."

"Foreign terrorists and hard-line Baathists want Iraq to descend into civil war. Foreign terrorists are using the Iraqi people as cannon fodder," said Khalilzad, who was confirmed by the Senate last week and was envoy to his native Afghanistan. He succeeds John Negroponte, now the national intelligence director.

"Hard-line Baathists who commit crimes against the Iraqi people are working to foster an all out civil war in the hope of either restoring dictatorship and their control of Iraq, or taking the country down with them. They will fail," Khalilzad said after his first meeting with President Jalal Talabani.

In a recorded message last month, the Jordanian-born al-Zarqawi purportedly gave his stamp of approval to the killing of fellow Muslims and civilians collaborating with the Shiite-led government and the United States. He also has said his aim was to start a civil war between the minority Sunni Arabs and the country's Shiite majority.

Sunni Arabs make up the core of the insurgency, and they have felt politically embittered by the rise of the Shiites and the Kurds — two communities that account for about 80 percent of the country's estimated 26 million people. Many Sunni Arabs boycotted January's historic elections.

Extremists in recent weeks have mostly targeted security forces at the forefront of government counterinsurgency operations — both to try to shatter their morale and prevent recruits from signing up.

"Iraq has become the center of global terrorism, and those groups' attacks are aiming to create a sectarian crisis," said Sabah Kadhim, an Interior Ministry spokesman. "Their main aim is to keep the country in chaos."

The number of attacks has escalated since Prime Minister Ibrahim al-Jaafari announced his Shiite-led government on April 28. Nearly 1,200 people have been killed since then, according to an Associated Press count based on military, police and hospital reports.

Some extremists also have begun threatening fellow Sunni Arabs because some of the minority's leaders have expressed a readiness to join the political process.

Sunni Arabs earlier in the week finally submitted a list of 15 candidates for a Shiite-dominated committee drafting Iraq's constitution, but the committee did not accept it and asked that it first be endorsed by representatives of the entire community.

The snag could delay the constitutional process, further eroding the little time left for the charter to be drafted by mid-August.

"I will support the efforts of Iraqis to develop a unifying vision — a national compact for Iraq's future," Khalilzad said. "This vision should be enshrined in an enlightened and sound constitution that embraces democracy, pluralism and individual rights. The process must be inclusive. For Iraq to achieve its full potential no community or sector should be marginalized."

He added that the United States would continue to help Iraqis fight the insurgency.

"Operation Spear," which targeted the border city of Karabilah, 200 miles west of Baghdad and near the border with Syria, killed about 60 insurgents. One Marine also died.

"The operation was very successful because we cleaned out some insurgent weapons caches, we found evidence of lots of foreign fighter involvement, and we fully integrated with the Iraqi security forces," said Marine Lt. Col Tim Mundy, of Waynesville, N.C.