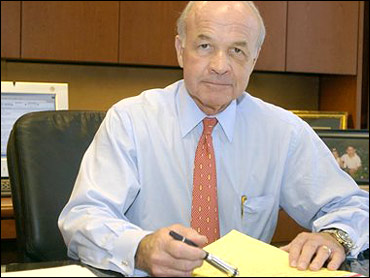 Enron Corp. founder Kenneth Lay describes his return to CEO just months before the energy company's collapse in terms that make him sound like he was a student cramming for a final after letting others do the coursework.

"Throughout that whole period, a lot of information was flowing to me from a lot of different sources," he said.

Lay contends he was clueless about fraud at Enron when he retook the reins of the company in mid-August 2001, after the abrupt resignation of his protege, former CEO Jeffrey Skilling. He also says that even as he was being warned about questionable activities, he was working hard — and legally — attempting to straighten out the company's financial problems.

Convincing a jury of that may prove to be crucial if he hopes to avoid a long prison term, since federal prosecutors are alleging that when the longtime Enron chairman regained the CEO's title, he took the reins of a long-standing conspiracy to fool investors and regulators into believing the company was healthy.

Lay sat down with The Associated Press in his downtown Houston office this week to discuss the 11 counts of conspiracy, fraud and lying to banks against him and other topics — namely his relationship with President George W. Bush and his personal finances — as part of his uncommon public defense blitz to return the Justice Department's punches. His attorney, Michael Ramsey, was not present.

His 15th-floor office in a nondescript downtown office building is smaller and less opulent than the 50th-floor accommodations at Enron's former headquarters, just a few blocks away. He keeps a number of photos of his grandchildren next to his computer

The affable Lay, accompanied by his daughter, Elizabeth Vittor, and a spokeswoman, appeared relaxed. Even now, having last week become the 30th person charged in the government's 2½-year investigation and Enron winding its way through bankruptcy, he remains a booster for the company that defines both his success and failure.

Lay said he tried and failed to save Enron, which rose to No. 7 on the Fortune 500 under his leadership, but he didn't know crimes that sealed the company's fate had been committed on his watch.

As he did at a news conference hours after his initial court appearance, Lay insisted he was duped by Andrew Fastow, the financial whiz he trusted to ensure its operations were legal.

He heard complaints, most notably from Sherron Watkins, the former Enron executive who warned Lay of impending doom less than four months before the company crashed. He also heard assurances that Enron could handle hundreds of millions of dollars in writeoffs for money-losing ventures in broadband and water as well as some of Fastow's convoluted financing methods.

"Out of that I'm sure an awful lot of things came to me, but again, from my standpoint, I was convinced all the way through that period, literally well into October, that the company was strong," Lay said.

He says he had to play catch-up because throughout 2001 and in late 2000, he was turning over CEO duties to Skilling, who assumed that post in February 2001.

Lay also says the company's sprawling operations meant he had to trust others to handle details of its inner workings. He noted that in its heyday, Enron had 30,000 employees in 30 countries, and more than 500 executives held titles of vice president or better.

Fastow, Enron's former finance chief, pleaded guilty in January to running schemes and partnerships to hide Enron debt and inflate company profits while funneling millions of dollars to himself. Fastow is the government's most high-profile cooperating witness — and the object of Lay's scorn.

"It looks like Fastow was the mastermind of all of it," Lay said. "And again, he apparently did a pretty good job of selecting those he wanted involved in it. But we're more likely to think there was bad activity going on very close to him than anywhere else in the company."

Enron's collapse led a series of corporate scandals that prompted Congress to pass sweeping reforms of securities laws. Thousands of Enron's workers lost their jobs, and the stock fell from a high of $90 in August 2000 to just pennies, wiping out many workers' retirement savings.

"This was probably the first time I had an officer — a very senior officer — working for me that indeed was doing something illegal, and was in fact stealing from the company," Lay said.

Lay wouldn't comment on or criticize other former executives facing charges — including Skilling and former accounting chief Richard Causey — who have pleaded innocent to fraud, conspiracy and insider trading charges. Lay says they, like him, are innocent until proven guilty.

In the corner of his office sits a framed photo reminiscent of his former political clout. In it, Lay stands between former President George Bush and his wife, Barbara, and the trio is laughing.

Lay and his wife, Linda, gave nearly $800,000 to Republicans and about $86,000 to Democrats from 1989 to 2001, according to the Center for Responsive Politics, a political fundraising watchdog group.

President George W. Bush received more than $550,000 from Enron, its employees and their relatives during his political career — the most from any source. More than 250 members of Congress from both parties also received Enron contributions, though three-fourths of the nearly $5.8 million given to candidates since 1989 went to Republicans.

"Clearly I and many people at Enron were strong supporters of President Bush, both when he ran for governor and when he ran for president," Lay said. "I think we had a fairly strong relationship. Was I his best friend? No, I wasn't his best friend or somebody that ... he might more likely call for day-to-day advice or whatever."

Lay did call a close Bush friend, Commerce Secretary Don Evans, and then-Treasury Secretary Paul O'Neill in the weeks leading up to Enron's bankruptcy. He said he didn't ask them to bail Enron out of its ever-growing crisis — and neither offered to do so — but "if they would have volunteered, I probably wouldn't have necessarily spurned it either."

Lay remains free on a $500,000 bond while he awaits trial. He says his and his wife's $400 million net worth has dwindled to less than $20 million, and most of that is earmarked for legal fees. If convicted on all counts, Lay could receive up to 175 years in prison plus fines possibly totaling more than $5.7 million.

He hedged when asked if he may be bankrupt by the time his criminal case and countless lawsuits are resolved.

"It's impossible to predict from day to day what the next day will hold," he said. "I certainly never expected to be indicted and certainly my legal team and I believe there's no reason I should have been."