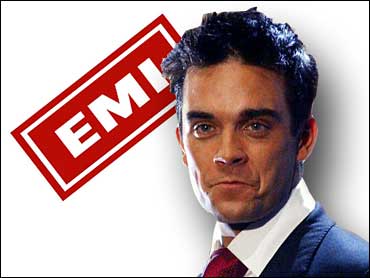 Whatever they may say in public, however cool they pretend to be, every British rock band wants to do what the Beatles and the Stones did back in the sixties. Cross the pond and conquer America.

Ten years ago, I tramped around the States in the wake of a boy band called Take That, as they did everything they could to capture the hearts and minds of your younger generation. They didn't.

One of their number was a feisty, funny guy called Robbie Williams who returned to Britain and pretty soon afterwards went solo. Now he's a massive star.

Well, he is here in the UK and across Europe, in South America and down under in Australia. In your country, love and respect him as I do, Robbie Williams couldn't even get arrested. And that's the problem for EMI. Remember EMI? The record label that signed The Beatles and watched in disbelief as the cash tills across America overheated? Even before The Beatles, EMI had a great legacy. They made Caruso a star at the beginning of the LAST century and for a hundred years and more, they've taken talent and made it great. Well, this time, they may have made a big mistake. So convinced were they that Robbie Williams would become a big star in the States that they splashed out big time on his contract.

Robbie was to deliver four albums for a hundred and thirty million dollars in return. It was the biggest ever UK record deal and almost as big as that crazy deal your record industry did with Michael Jackson back in the days when his records flew out of the shops. But Robbie's records haven't sold in the States. In fact, you can get his latest CD in a Florida store, discounted by sixty percent. Next week they'll probably pay you to buy it.

The result? The direct result is that the third largest music company in the world has seen its shares tumble, two thousand jobs go to the wall and four hundred acts dropped from the roster. The record company that brought you The Beatles isn't down and out yet, but it's in a parlous state and, America, it's your fault. You didn't rush out and buy Robbie's albums and I'm here to tell you, they're pretty good. Listen. If you want to thank us for all our support over Iraq, then remember the British music industry and don't just say "Robbie who?" Join the minority and proudly buy a Robbie Williams album today ... while they're still on sale.

CBS Up To The Minute Contributor Simon Bates discusses America from a British point of view.