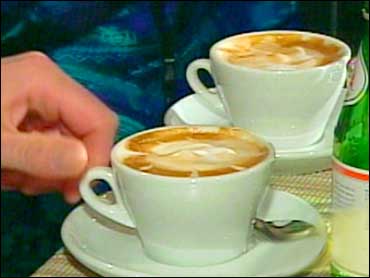 For those who love the full flavor of real coffee but don't like the way it keeps them up at night, genetic engineering may have a solution.

Researchers say they have engineered coffee plants that have 70 percent less caffeine than usual in their leaves.

The crucial question of whether the beans themselves have less caffeine will not be known for three to four years, when the plants mature, said researcher Shinjiro Ogita. However, the results indicate it is possible, Ogita reported in Thursday's issue of the journal Nature.

The researchers at the Nara Institute of Science and Technology in Japan used RNA interference, an increasingly popular genetic tool, to manipulate the plant and thwart the gene responsible for an enzyme used to make caffeine.

Experts contend a caffeine-free bean would be an improvement over current decaffeination processes, which use water or organic solvents to remove the stimulant from the beans before they are roasted, taking out some flavor and aroma as well.

Alan Crozier, a University of Glasgow researcher who has worked on genetically modifying coffee, said the Japanese group is the first to engineer the plants to produce less caffeine.

"If it were to take over, clearly it's a much cheaper way to produce decaffeinated coffee," Crozier said.

However, concerns about genetically modified foods and a lack of interest by the coffee industry could slow development, he said.

John Stiles, a scientist working to develop a caffeine-free coffee plant for Waialua, Hawaii-based Integrated Coffee Technologies Inc., said the Japanese researchers have not yet reached the commercial decaffeination level of 97 percent.

Ogita said the Japanese researchers are also working on arabica plants and should be able eventually to remove all caffeine.

At the Daily Grind in Baltimore, some welcomed the news of the genetically modified coffee plant. Others were as lukewarm as a half-finished cappuccino.

Marcia Sternbergh, 52, of Baltimore said she prefers regular coffee for the taste "and the jolt." At night, though, she would drink the non-caffeine kind.

Harold Cones, 60, of Newport News, Va., who has to drink decaf because of an irregular heartbeat, said he would welcome the new coffee because he could avoid caffeine and get the flavor.

"Oh, that would be good. There's a difference," Cones said, sipping a decaf. "Every now and then I have a cup of real coffee and it's really nice."

"Sometimes, you get that cup of coffee," Cones said, "and you think you're high in the mountains, in an old hotel, and the aroma goes up into your sinuses and you say, 'That's a good cup of coffee.'"