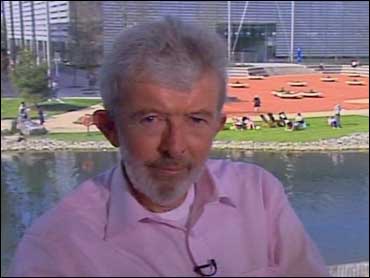 This grand old country of ours is steeped in history and legend. But you Americans always assume we're a sensible race - a bit quiet, slow to change maybe, not given to absurd flights of fancy. How wrong you are.

In fact England is positively crawling with witches, warlocks, wizards and water diviners. There is a hardly a village in the Kingdom where you will fail to find someone gazing into a crystal ball, offering to tell your fortune, or getting involved in close encounters with aliens.

Forget Salem, when it comes to the occult, we've cornered the market. Harry Potter isn't just a best seller and an international movie hit - it is real life for many of us. There are parts of England where one in ten of the people believe they have the power to teleport their neighbors - pick them up and spirit them away, literally.

The northern county of Yorkshire, for example, is packed with telepathists, time-travelers, enchanters, mediums and astrologers. Essex - to the east of London - contains the highest number of people subscribing to ancient pagan customs and rituals, and my own home county, Kent - just south of the capital - has three times the national average of psychic healers.

This isn't just mumbo jumbo. It is the result of detailed academic research overseen by a leading cleric of the Church of England which normally has a vested interest in playing such things down. But even the Church can't disguise the extent of this occult revival. The survey found only two places in the land where it fails to flourish - the industrial Midlands of England - which is a bit short of the open green spaces most witches prefer (nowhere safe to land your broomstick), and parts of Western Scotland, which is far too cold and bleak for anything.

Everywhere else the paranormal is booming. Ancient spells are available on every sidewalk. It may seem peculiar but please don't mock. They might turn you into a toad.
By Ed Boyle