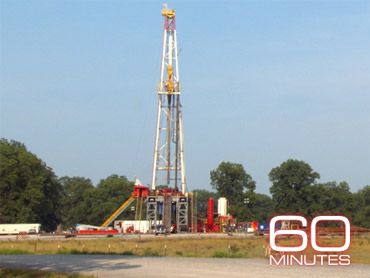 Natural gas has been the ugly stepchild of our national energy debate: Never enjoying the political muscle of oil and coal, and never capturing the imagination like solar panels and wind farms. And to top it all off, it was in short supply.

But that's changing and now this stepchild is being touted as the hope of the future - the answer to our energy problems.

And if you're sitting on top of it, you may become a new American phenomenon: A "shaleionaire."

And yet, if the BP spill last summer taught us anything, it's that exploring for energy has safety risks. But as we first reported in November, that can get lost in all the excitement.

What is increasingly evident is that shale gas is overwhelmingly abundant right here in the U.S.A.

"In the last few years, we've discovered the equivalent of two Saudi Arabias of oil in the form of natural gas in the United States. Not one, but two," Aubrey McClendon, the CEO of Chesapeake Energy, told "60 Minutes" correspondent Lesley Stahl.

"Wait, we have twice as much natural gas in this country, is that what you're saying, than they have oil in Saudi Arabia?" Stahl asked.

"I'm trying to very clearly say exactly that," he replied.

Chesapeake Energy is the largest independent gas producer in the country. McClendon is on a mission to get the U.S. off foreign oil and dirty coal.

Gas has nearly half the carbon emissions of coal, and no mercury.

"But natural gas is still a fossil fuel," Stahl pointed out.

"So is it perfect? No," McClendon said. "The answer is it's not perfect. But for the next 20 years, natural gas is probably our best bet. And the good news is, we've got it. And we've got as much of it as anybody else in the world."

There are shale formations across large parts of the country, and there is production or exploration in over 30 states. It's an American energy renaissance.

Some 10,000 wells will be drilled in northwest Louisiana, in some of the poorest communities in the country, where impoverished farmers are becoming overnight millionaires as they lease their land for drilling.

"I never dreamed of money like this," C.B. Leatherwood told Stahl. "

Leatherwood, a retired oil field worker, got a bundle to drill under his farm: $434,000.

"So what'd you do that day?" Stahl asked Smith.

"I sat back and thought about it for a, all day. And I said, 'I'm a millionaire.' And that didn't sound right," he replied.

They actually call them "shaleionaires," and they don't mind putting up with the noisy, smelly drilling when the wells are built because they get a cut of the profits, which could last for years and add up to millions more.

Within a year, shale drilling generated almost $6 billion in Louisiana in new household earnings. As the rest of the nation plunged into a recession, the region added over 57,000 local jobs, and the Cadillac dealership in town is hopping.

People have known for a century that shale contained gas, but it was too difficult and pricy to extract.

On the surface, shale looks like solid rock, but under a microscope, dark spaces show where the gas is - and those spaces are everywhere.

The breakthrough in extraction happened when two existing technologies were combined: the first involved accessing the shale by drilling sideways underground.

"We're currently over two miles down," drill site manager Chuck Duginski explained to Stahl. "Now, later today, we'll turn the bit from vertical to horizontal along this path, and then we'll drill in our target zone, for a mile down to the south."

The other technology is hydraulic fracturing or "fracking," where millions of gallons of water, mixed with sand and chemicals, are pumped down the well at enormous pressure.

"We break the rock. We fracture the rock. And that stimulates the ability of the gas to flow into the well bore, where we can flow it to the surface and sell it," Duginski explained to Stahl.

In light of the BP oil spill in the Gulf, Stahl asked Aubrey McClendon about the safety of fracking.

"What would happen if you go down to dig for shale and you have an explosion and you destroy a whole part of the country?" Stahl asked.

"It cannot happen, okay?" McClendon replied. "Because we're not a mile underneath the surface of the ocean. And if something were to get away - and there are incidents where wells have loss of control - you can go fix it."

An underground explosion is impossible because there's no oxygen or anything to ignite a blast. But drilling is now a fact of life near homes and farms. And the industry has racked up thousands of accidents and safety violations above ground.

What happened in Tim and Christine Ruggiero's backyard is happening more and more: they moved to a pastoral ten-acre ranch in Decatur, Texas, in 2004 to raise their horses, and their daughter Reilly.

But in 2009, a company called Aruba Petroleum came and drilled two wells outside their windows, leaving behind a permanent eyesore.

It turns out the Ruggieros had bought the land, but didn't own the rights to the minerals beneath it.

"You see over here on this tank? And you see where it's just been still leaking?" Tim Ruggiero asked Stahl, pointing out a tank on his land. "Why is it doing that?"

That leaking is just the half of it: they videotaped oozings and gushings. When the state environmental agency shot video of hissing toxic air emissions with infrared cameras, the company was hit with a fine.

"I keep hearing that this process, the horizontal drilling and the fracking, is safe," Stahl said to the Ruggieros.

"Well, define safe. Safe for who? Safe in the process, or safe for the people that are 200 feet away from it?" Tim Ruggiero asked.

"They put a concrete casing down in the ground in between your water table and the drilling fluid, but cement doesn't ever crack? You don't ever have well blowouts?" Christine Ruggiero added.

In other words, taking shortcuts and human error are endemic to this drilling process.

On the Ruggieros' land, there were problems involving the gas company's equipment: valves weren't tightened; a tank, left unattended, overflowed; fluids spilled from a frack container. Aruba said they could not comment because the Ruggieros are suing them.

Aubrey McClendon's company, Chesapeake, has a much better track record, but that doesn't mean they haven't had problems too.

"If people are involved, accidents are going to happen. Planes crash, trucks crash, cars crash. It happens. We will have an incident or two," he told Stahl.

Asked if Chesapeake has ever had an accident, McClendon said, "Any kind of an accident? Sure. Probably the most publicized incident was in Louisiana."

It happened in 2009, when 17 cows grazing near a drilling site died a gruesome death after drinking fracking fluids that ran off into their pasture. Industry wide, accidents keep happening due to machine malfunctions or workers cutting corners.

Environmentalists like Michael Brune, executive director of the Sierra Club, say the industry is under-regulated.

"The first thing that the industry should do is disclose what chemicals are being used in fracking and then limit the amount of toxic chemicals to a point of zero," Brune said.

The industry doesn't have to disclose what's in the tens of thousands of gallons of chemicals they use when they fracture the shale, because of the so-called "Halliburton loophole."

Halliburton is a leading fracking company and the loophole was created in 2005 under Vice President Dick Cheney, who used to be Halliburton's CEO.

"The 2005 energy bill completely exempted the natural gas industry and fracking technology from any regulation under the Safe Drinking Water Act. It's an outrage," Brune said.

"Part of the fracturing process involves you pouring down some pretty nasty chemicals. What happens if they spill all over the place?" Stahl asked Aubrey McClendon.

"Okay, let's define nasty chemicals," he replied. "Nasty chemicals are underneath your sink. The reality is, you don't drink Drano for a reason, but you have Drano in your house. If you want to define them as nasty, go ahead."

"There are nasty chemicals that affect your liver, that cause cancer, that shut down your system," Stahl pointed out.

"You don't want to drink frack fluid. If you take away nothing from this interview...," McClendon replied.

"Well yes. Of course that's the fear," she remarked.

"But fresh water aquifers are only from the surface to about one thousand feet below the surface of the earth, okay? We are fracking wells at depths of 7, 8, 10, 12 thousand feet. Okay? So there is almost two miles of rock between where we are active and where fresh water is drawn from," McClendon said.

Last year, the Environmental Protection Agency began studying the effects of fracking on drinking water: is the problem fracking per se, or human error? Consider what happened in the Appalachian town of Dimock, Pa.

In the shale gas gold rush, Dimock is the ghost town.

"How many of you lost your water supply?" Stahl asked a group of residents.

All of them raised their hands.

A company called Cabot Oil and Gas paid many of the folks in Dimock $25 an acre, and they were happy until one day a water well exploded.

"My boy had come over the night before and said, he just said, 'Dad, we got gas in the water over there.' I can actually shake the jug up and light it," Bill Ely told Stahl. "I can take my water, just put it in a gallon jug, shake it up, turn it up and it'll explode."

Ely demonstrated it for Stahl by hooking a hose from his well to a jug and lighting it; there was an audible pop.

State authorities have determined that gas leaked into the water because of a poor cement job; Cabot now supplies bottled water to the residents, but has admitted no guilt. So the company is being sued by some residents.

"This is a poor area. This is the perfect place to come in and drill. A lot of guys didn't have work. Now they're driving trucks. The bars are hopping, the rentals are full. So there is an economic boom here, but at what price?" Victoria Switzer asked Stahl.

"You have these landowners who will say that their water was clean. They could drink. They couldn't light it on fire. And then the gas industry came in and now taking a shower makes them sick. There are too many landowners who are describing the exact same scenario. And so it can't just be a coincidence. There's something wrong here," the Sierra Club's Michael Brune said.

"So here we have natural gas from shale touted as the solution to our energy problems by one group. Another group says it's the biggest environmental nightmare," Stahl remarked.

"Ah well, actually, they're both correct," Brune said. "So what we need to do is we need to promote gas as a cleaner alternative to coal and oil, but hold the industry accountable for tighter standards."

Which Aubrey McClendon says he'd go along with, because he says natural gas is such a huge game changer: "If you use natural gas, America can establish independence from OPEC and can put Americans back to work. We can lower our carbon emissions, and we can begin to improve the economy as well by not exporting a billion dollars a day of American wealth. The greatest wealth transfer in human history takes place every day. And it doesn't have to."

Jason Sudeikis on making "Ted Lasso" and the show's future