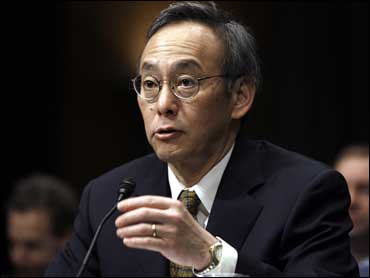 Energy Secretary Steven Chu said Wednesday he's ready to push out some of the billions of dollars from the economic recovery plan within a couple of months, with money for projects to build and improve power lines and help for low-income families to cut energy use.

"We're really looking at months" for some of the money to begin flowing, said Chu as he briefly answered reporters' questions after an appearance before a meeting of state utility regulators. He promised approval of some loan guarantees and other action by the end of April or early May.

Later during a conference call with reporters, Chu said the department was looking to pump money into electricity transmission projects that already have gone through lengthy environmental reviews to get work started quickly.

"There are many places where these projects are ready," said Chu.

The Energy Department will manage $39 billion in grants, tax breaks and loan guarantees under the stimulus package, much of it to boost renewable energy and conservation programs.

Chu said he will speed up processing energy project loan guarantees that have languished at the Energy Department for nearly three years - much of it intended for support to the nuclear industry - and quickly begin work on $6 billion in new loan guarantees aimed at helping fledgling renewable energy industries.

Chu, a Nobel Prize-winning physicist, was greeted warmly by state regulators and others attending the winter meeting of the National Association of Regulatory Utility Commissioners. He spent most of his remarks discussing the need to build more power transmission lines to move energy from isolated wind farms to urban centers and the need for a "smart" grid to improve transmission efficiency.

During his speech, Chu criticized the elaborate and time-consuming application process for the loan guarantees, saying in some cases the applications added up to more than 1,000 pages. He suggested a 50-page application would do the job.

Chu cited a Bonneville Power Administration transmission line project in the Pacific Northwest as one that is ready to go and producing jobs once stimulus money is provided. The project, originally planned to take electricity from a now canceled coal-burning power plants, already has gone through environmental reviews, so work could begin quickly, he said.

The Energy Department also plans to move quickly to distribute money under a government program to help low-income families improve the energy efficiency of their homes. The economic stimulus package provides $11 billion to the so-called "weatherization" program.

On the need to expand and modernize the transmission grid, Chu demonstrated his "hands-on" involvement in such issues as "smart grid" development, and the importance of the grid to making wind-produced electricity a larger share of the nation's power supply.

The good news is that the United States has vast areas where wind is plentiful, he said, but "the bad news is renewable energy sources are in places that don't have many people" requiring construction of new transmission lines.

Chu, former director of the Lawrence Berkeley National Lab, also made clear his focus will be on such issues as science and renewable energy and not international oil market issues.

Asked by a reporter what he plans to do to try to keep the OPEC oil producers from dramatically cutting production at an upcoming meeting, Chu replied: "That's not in my domain."

Later when pressed about the OPEC comment, Chu said his response may have reflected some "naivete" but he reiterated that the Energy Department's primary role is "to focus on what we can do domestically" on energy matters including the promotion of oil price stability.

Global oil prices have fallen dramatically to around $35 a barrel as the economy's woes force down demand. The OPEC cartel members have tried to counter the price slide by cutting supplies, and the group's leaders have said they may slash output again at a meeting next month.