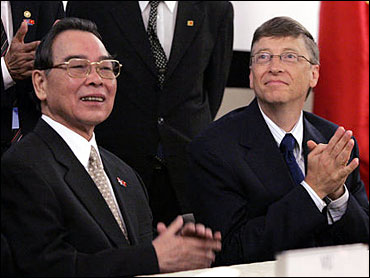 Vietnamese Prime Minister Phan Van Khai's groundbreaking visit to the White House comes as ties in security are beginning to take root alongside burgeoning trade and economic links between the United States and its former enemy.

President Bush welcomes Khai Tuesday, three weeks before the 10th anniversary of the restoration of U.S. diplomatic relations with Vietnam.

While Vietnam's human rights record remains iffy, the relationship has flourished in other ways in stark contrast to the day in April 1975 when the United States pulled out of Vietnam ahead of Hanoi's triumphant forces, triggering a break in relations.

After his discussions with President Bush, Khai plans a meeting with Defense Secretary Donald H. Rumsfeld. The incipient military ties between the two countries have included periodic docking of U.S. warships in Vietnam and plans for U.S. military training of Vietnamese officers. Intelligence sharing and cooperation on counterterrorism activities also are part of the mix.

Since President Clinton restored normal diplomatic relations on July 11, 1995, trade with Vietnam has increased 20-fold. Khai will oversee the signing of an agreement for state-owned Vietnam Airlines to buy four Boeing 787 passenger planes. Khai also hopes to receive the U.S. blessing for a Vietnamese bid to join the World Trade Organization.

During a visit to Redmond, Washington, on Monday, Khai and Microsoft Corp. Chairman Bill Gates signed an agreement under which the firm will train and develop more Vietnamese information technology companies.

Microsoft also will offer computer and software training to more than 50,000 teachers in the country.

Khai's visit is expected to include discussions on China, with which Vietnam has had a hostile, sometimes violent, history. The two countries fought a bloody border war in 1979.

"Vietnam and the United States share the same concerns about what China's ultimate goals are in the region," said Dana Dillon, an Asia expert at the Heritage Foundation.

The U.S. worry about China has been reaffirmed in recent days by both Rumsfeld and Secretary of State Condoleezza Rice in separate appearances.

As Vietnam moves closer to the United States, it can expect much closer scrutiny of its human rights performance.

That point was underscored on Monday at a hearing on Vietnam of a House International Relations subcommittee on human rights.

Chairman Christopher Smith, a New Jersey Republican, expressed regret that the State Department would not send a Vietnam expert to testify.

This represented, Smith said, a missed opportunity for the department to explain the incongruity between "ever-closer" U.S.-Vietnamese military and trade relations and U.S. concern for Vietnam's "appalling lack of respect for the basic human rights of its citizens."

"The government of Vietnam has inflicted and continues to inflict terrible suffering on countless people," Smith said.

The State Department is pleased with Vietnam's willingness to ease curbs on religious freedom.

John Hanford, U.S. ambassador at large for international religious freedom, said last month after a visit to Vietnam that the country was stopping the practice of coercing citizens to renounce their religious faith and was releasing prisoners detained for their religious beliefs.

The two countries were signing an executive agreement Tuesday on cooperation in adoption.

Khai is accompanied in Washington by 30 senior government officials and 80 Vietnamese business leaders.

On Wednesday, after discussions on Capitol Hill, Khai will travel to New York. On Thursday, he will ring the bell at 9 a.m. that signals the opening of trading at the New York Stock Exchange. His last full day will be Friday, where he will meet with leaders of Harvard University and the Massachusetts Institute of Technology in Cambridge, Mass. He leaves Saturday for home.