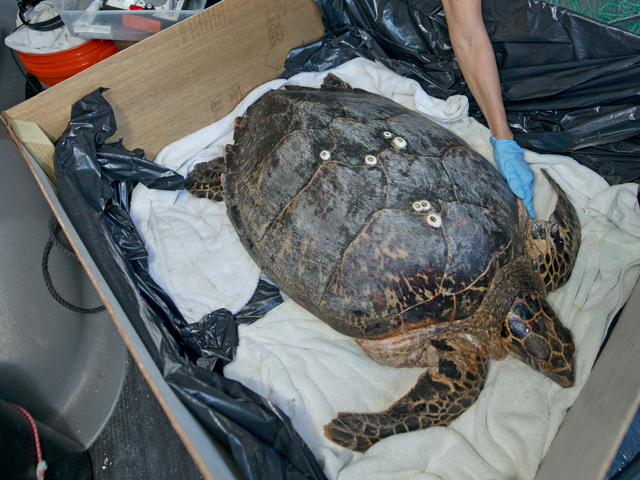 (AP) MARATHON, Fla. - An endangered female hawksbill sea turtle, laden with eggs, has arrived at the Florida Keys-based Turtle Hospital after being flown to the state from the U.S. Virgin Islands.

American Airlines provided free transportation on Saturday for the turtle to Miami, where it was loaded on the hospital's ambulance for the trip down the Keys' Overseas Highway.

The 123-pound reptile was in stable condition Saturday. It was found on a St. Croix beach on Aug. 24, likely washed ashore by Tropical Storm Isaac, Virgin Islands fish and wildlife officials said.

The turtle has deep wounds on both shoulders. Officials said it might have been hooked by a fisherman and then repeatedly gaffed to remove the fishing gear.

Hospital staff said they will X-ray the turtle to check for fishing gear that may have been ingested and will treat the wounds.