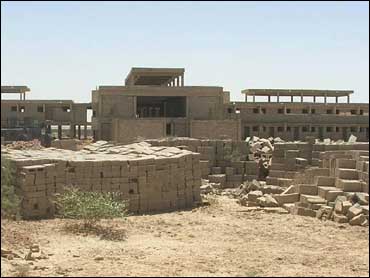 In the flatlands north of Baghdad sits a prison with no prisoners.

It holds something else: a chronicle of U.S. government waste, misguided planning and construction shortcuts costing $40 million and stretching back to the American overseers who replaced Saddam Hussein.

"It's a bit of a monument in the desert right now because it's not going to be used as a prison," said Stuart Bowen, the special inspector general for Iraq reconstruction, whose office plans to release a report Monday detailing the litany of problems at the vacant detention center in Khan Bani Saad.

The pages also add another narrative to the wider probes into the billions lost so far on scrubbed or substandard projects in Iraq and one of the main contractors accused of failing to deliver, the Parsons construction group of Pasadena, California.

"This is $40 million invested in a project with very little return," Bowen told The Associated Press in Washington. "A couple of buildings are useful. Other than that, it's a failure."

In the pecking order of corruption in Iraq, the dead-end prison project at Khan Bani Saad is nowhere near the biggest or most tangled.

Bowen estimated up to 20 percent "waste" - or more than $4 billion - from the $21 billion spent so far in the U.S.-bankrolled Iraq Relief and Reconstruction Fund. It's just one piece of a recovery effort that swelled beyond $112 billion in U.S., Iraqi and international contributions.

But the empty prison compound - in the shadows of more than two dozen watchtowers now dotted by birds' nests - is an open sore for both American watchdogs and local Iraqi politicians who had counted on the prison as an economic boost.

The head of the municipal council in Khan Bani Saad, Sayyed Rasoul al-Husseini, called it "a big monster that's swallowed money and hopes" - including those for more than 1,200 new jobs.

He sometimes drives out to the site, near groves of date palms and a former Saddam-era military training camp about 12 miles northeast of Baghdad and just over the border in the tense Diyala Province.

Al-Husseini says he walks the perimeter and wonders what can be salvaged. A housing development is not possible, he said. Many concrete walls lack proper iron reinforcements and "can collapse at any time," he said. Birds and small animals have found homes in the towers and crannies.

"But some of the cell blocks are good," he suggested. "So maybe it can become a factory. I don't know. It's depressing."

The idea for the modern-style prison began with the Coalition Provisional Authority running Iraq after Saddam's fall.

On behalf of the authority, the U.S. Army Corps of Engineers awarded a $40 million contract in March 2004 to global construction and engineering firm Parsons to design and build a 1,800-inmate lockup to include educational and vocational facilities. Work was set to begin May 2004 and finish November 2005.

Nothing went right from the start, the report says.

The Sunni insurgency was catching fire. The U.S. was under pressure to improve prison conditions following the abuses exposed at Abu Ghraib.

Washington's focus shifted quickly from rebuilding to just holding its ground. The prison project got started six months late and continued to fall behind - until Parsons asked to push the completion date to late 2008, the report said.

The U.S. government pulled the plug in June 2006, citing "continued schedule slips and ... massive cost overruns." But they hadn't abandoned the hope of finishing the project - awarding three more contracts to other companies in a doomed effort.

The waste was made more egregious by the fact that Diyala badly needs more prisons to handle a growing inmate population. Bowen's team was told that about 600 inmates are crowded into an existing Diyala prison designed for 250 inmates and that the overcrowding and health conditions are so grave that several inmates have died, the report says. 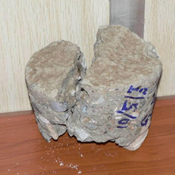 The problem at Khan Bani Saad is only one example of the millions of dollars auditors found were wasted on construction projects by Parsons, which left Iraq two years ago.

In a companion report also being released Monday, Bowen said the prison was part of a $900 million Parsons contract to build border posts, courts, police training centers and fire stations. It was one of 12 contracts awarded in 2004 in hopes of restoring Iraq's infrastructure.

Of 53 construction projects in the massive Parson contract, only 18 were completed.

As of this spring, Parsons had been paid $333 million. More than $142 million of that - or almost 43 percent - was for projects that were terminated or canceled.

While the failure to complete some of the work was "understandable given the complex nature and unstable security environment in Iraq, millions of dollars" were likely wasted, the report said.

Bowen said only about 10 U.S. contracting officers and specialists were working on the $900 million contract, whereas 50 or 60 would be assigned to a comparable undertaking in the United States.

In a last wasteful act at Khan Bani Saad, the U.S. government allowed $1.2 million worth of construction supplies to be left unguarded at Khan Bani Saad after work was suspended in June 2007 - fencing, gravel, piping and other items. Most of it is now missing.

U.S. officials turned over control of the semi-finished prison to Iraq's Justice Ministry nearly a year ago. The ministry promptly replied it had no plans to "complete, occupy or provide security" for the facility, the report said.

In the end, Parsons got $31 million and the other contractors got $9 million.

Some parts of the facility are usable, but construction in other parts is so substandard that demolition is the only option, the report said. Inspectors found cracking and crumbling concrete slabs, columns not strong enough to support the structure and incorrect use of reinforcement bars meant to strengthen the concrete.

"Khan Bani Saad is a microcosm of the shortfalls in the reconstruction program," said Bowen.

And the choice of Parsons - in retrospect - was part of a far bigger web of alleged shortcomings by the conglomerate in Iraq.

"This is the worst performing contractor that we have identified" among the seven firms so far studied in Congress-mandated reviews of Iraqi projects, said Bowen.

It was not possible to get advance comment from Parsons. Under the rules for the release of the audit, reporters were not allowed to reveal its details until Monday.

But the report said Parsons had argued that the U.S. government misrepresented the security conditions. Parsons said that its subcontractors faced threats that either shut down or slowed work almost daily. In August 2005, the site manager for one of Parsons' subcontractors was shot to death in his office.

Diyala remains one of the most dangerous places in Iraq. In the past week, U.S. and Iraqi forces have stepped up sweeps against insurgents in one of their last footholds near Baghdad.

But officials of the Army Corps of Engineers - one of the agencies that oversaw the prison construction - countered that Parsons understood conditions in Iraq at the time. They also said Parsons rarely reported security threats, and only recorded seven days when it cited delays due to violence.

Bowen said his agency has done 120 audits on Iraqi projects. "And they tell an episodic story of waste," he said.