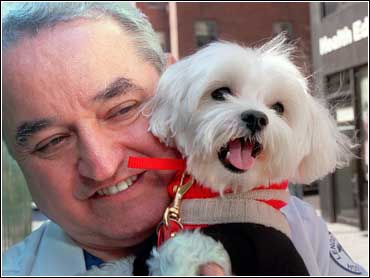 The year before, his 6-pound Maltese dog, Princess, dislocated a disc when she fell off the sofa. The bill for treatment including a CAT scan was $750.

So Castro was thrilled when his employer, Lenox Hill Hospital, added pet health insurance to its list of optional benefits.

"Everybody went crazy," said Castro, who supervises the sterilization of instruments in the hospital's operating room. "I think it's great."

Lenox Hill is among a small but growing number of companies offering some form of pet health insurance to their workers.

Jerry Hirsch, of Pet Assure Inc. in Dover, N.J., which manages the Lenox Hill pet insurance program, said the program is one of several employee benefits being added in the current booming economy.

"Employers are looking for ways to attract and keep their favored employees," he said.

It's difficult to determine exactly how many employers offer pet health insurance. Kristin Accipiter, spokeswoman for the Society for Human Resource Management, said a 1999 survey of her organization's 130,000 members found that one percent of companies offered the benefit.

Last year was the first time the question was included in the annual survey, she added.

Rebecca Lewis, vice president for marketing and communications at Veterinary Pet Insurance Inc., in Anaheim, Calif., said her company has sold individual policies since 1982 but group plans for employers only started taking off in 1999.

Additionally, she said, "The role of the pet has truly evolved. Pets are seen more as a family member."

Lewis said VPI has between 75 and 100 corporate members nationwide, including Ralston Purina and Mirage Resorts.

Alan Feldman, a spokesman for Las Vegas-based Mirage Resorts, said the company started offering pet insurance about six months ago, and so far just under 100 of Mirage's 32,000 employees have signed up.

"It's a wonderful convenience for employees who are looking for this kind of insurance for their furry loved ones," Feldman said.

VPI offers a typical indemnity plan, with average premiums of $200 a year and a $40 deductible. VPI covers only dogs and cats, and pre-existing conditions generally are not covered.

In contrast, Pet Assure is not a traditional insurance program but "kind of an HMO for pets," said Hirsh, the company's director of communications.

Members pay a small fee at Lenox Hill it's a $4 monthly payroll deduction and get a 25 percent discount at network providers. All animals are covered regardless of age, infirmity or species.

Lenox Hill signed on after polling its employees about what new benefits they would like. Life insurance for spouses was the top choice, followed by car and home insurance. Pet health insurance was No. 3.

"It did surprise me," O'Connor said. "I didn't really think that many people knew it was something that was available."

But, she added, "If you've ever had a pet get very ill, it can be very expensive. And there are many people who want to see everything done to save their pet, but cost often impedes them in their ability to do that."

So far 50 employees out of about 2,800 have signed up for the pet insurance program, which went into effect Saturday.

"We expect that we'll get additional enrollments as it becomes an established program," O'Connor said.

The 25 percent discount may not sound like much, but Castro noted, "It's better than what we had before, which was nothing."

He regularly pays at least $300 for a physical for Princess, a bright-eyed 8-year-old who was dressed in a sweater for a jaunt outdoors.

"My wife worries so much about her; anything abnormal, she runs to the vet," Castro said.

It was suggested that not everyone would spend $1,700 on a hysterectomy for a cat.

"I couldn't let her suffer," Castro said. "She would have died."