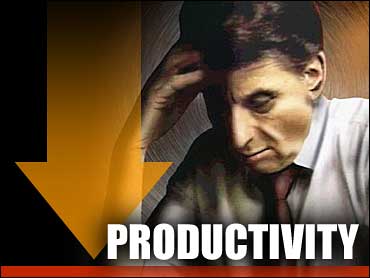 Headaches, back pain, arthritis and other muscle and joint pain cost the nation's employers more than $60 billion a year in lost productivity, a study has found.

Most of those costs are from sub-par job performance as a result of the pain rather than absenteeism, according to the study, based on a telephone survey of 28,902 workers in a wide variety of blue-collar and white-collar professions.

The study focuses on some of the most common pain conditions that affect both men and women. It doesn't include some common conditions such as dental pain and menstrual pain.

Even so, the economic costs are enormous, said Dr. Catherine DeAngelis, editor of the Journal of the American Medical Association.

One JAMA study found that treating depression in arthritis patients helped reduce joint pain, and another said better management of pain in children is needed. A study in November's Archives of Pediatrics & Adolescent Medicine, published Monday, found a low-tech pain reliever for infants during routine shots: sugar water, bottles or pacifiers and being held by parents.

Stewart did the 2001-02 research while at AdvancePCS Center for Work and Health in Hunt Valley, Md.

The findings should raise awareness among workers, doctors and employers, who might be able to help keep pain-related costs down by launching workplace awareness campaigns about treatment options, Stewart said.

"Employers are not attuned to prevention, and they need to definitely put more money into it" to avoid pain-related costs in the long run, said Lebovits, who was not involved in the study.

Workers were asked about any absent days or lost on-the-job productivity during the previous two weeks, and about specific types of pain that might have contributed.

Nearly 53 percent reported having pain during the previous two weeks, and 13 percent said they had a pain-related loss in productivity. The average amount of lost time was 4.6 hours per week.

The total nationwide cost of pain-related lost productivity was estimated at $61.2 billion yearly, based on a formula using wage data and including converting reduced performance into lost hours.

The survey did not factor in lost productivity among employees when a co-worker is absent or not performing at full tilt.