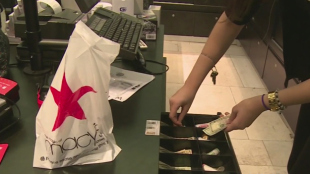 GARDEN CITY, N.Y. -- Pandemonium erupted Tuesday at a Long Island mall filled with holiday shoppers when an attempted robbery led to gunfire, sending crowds of people running and screaming and leaving a mall employee in serious condition with a gunshot wound, authorities said. A suspect was in custody.

Acting Nassau County Police Commissioner Thomas Krumpter said the suspect entered the Rolex dealer at the Roosevelt Field Mall in Garden City at around 1 p.m. A struggle with store security ensued, and a gun went off. It's unclear whose gun it was.

The single shot went into the main mall, hitting a 67-year-old employee, who was taken to the hospital. Jessica Julig, of Queens, said she was Christmas shopping when employees suddenly told her to stay down and move to the back of the store.

"I was shaking," she said. "People were screaming and then I started to feel the whole mall shake." She said she looked out and "saw people running everywhere." She said shoppers weren't told what had happened but were told to take cover and then evacuate.

"They took us to the back and then out a service entrance," she said. Outside, she said she saw people screaming and crying. "I'm terrified," Julig said. "I just can't stop shaking. ... There were so many little kids in there. Everything was fine. We had been shopping all morning."