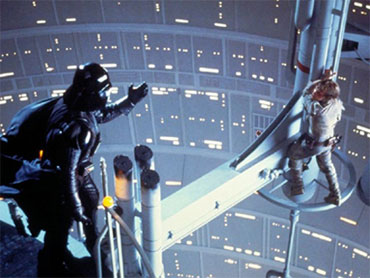 Surely a doomed plane, a bumbling French police inspector, a disco demon, a REAL demon, and a diminutive green Jedi master must be preserved for future film audiences?

Of course, says the Library of Congress - and don't call us Shirley.

The raucous comedies "Airplane!" and "The Pink Panther"; "The Empire Strikes Back," the best of the "Star Wars' saga; the Spike Lee biofilm "Malcolm X"; the horror shocker "The Exorcist"; and John Travolta's dance moves in "Saturday Night Fever" are just some of the memorable movie landmarks that have been deemed worthy of preservation.

The Library of Congress today announced 25 titles to be added to the National Film Registry, a compendium of motion pictures that have been judged to be culturally, historically or aesthetically significant.

Not simply a "best of" list, the National Film Registry is meant to focus attention on movies from across a wide spectrum of studios, independent and amateur filmmakers, journalists, government agencies and advertisers - films that have demonstrated their value in a historical sense.

In addition to timeless Hollywood studio productions like "Gone With the Wind," "The Godfather," "Duck Soup" and "2001: A Space Odyssey," the Registry also includes experimental films and animation, documentaries and newsreels, music videos, movie ads, and amateur films, such as the infamous 8mm footage shot by Abraham Zapruder of the assassination of President Kennedy.

One of the goals of the Registry is to spearhead preservation of motion pictures. Under the National Film Preservation Act, the Library of Congress works with studios and archives to make sure copies of movies on the Registry are protected and saved for future generations.

This is crucial because more than half of motion pictures produced before 1950, and as much as 90 percent of films from the Silent Era, are lost - their negatives discarded, destroyed by fire, or deteriorated into dust. The fading of color film stocks has also imperiled movies dating from the 1950s through the '70s. Also needing special attention are "orphan" films - movies made outside the studio system which have not been kept in studio vaults or which have fallen out of copyright.

"As the nation's repository of American creativity, the Library of Congress - with the support of Congress - must ensure the preservation of America's film patrimony," said Librarian of Congress James H. Billington.

The 25 titles added this year are:

"Airplane!" (1980) - With more laughs crammed into 88 minutes than audiences deserve, this spoof of disaster films, featuring a cast of straight-faced actors spewing goofy dialogue and slapstick, effectively killed the disaster film genre - and ushered in a new one, the spoof film.

"All the President's Men" (1976) - One of the greatest journalistic coups was Bob Woodward and Carl Bernstein's investigation of the Nixon White House's ties to the Watergate break-in. Their Washington Post articles led to the downfall of a president, but Alan Pakula's drama miraculously offers nail-biting suspense even though we all know how it ends.

"The Bargain" (1914) - In this feature film debut of William S. Hart, the silver screen's first cowboy star, a thief escapes a stagecoach robbery gone bad, is nursed back to health by a good woman, and then jailed by a sheriff with designs on Hart's stolen loot. Hart's morally ambiguous protagonists presaged Clint Eastwood's Man with No Name and Bill Munny of "Unforgiven."

"The Cry of Jazz" (1959) - Edward Bland's short film about the politics of jazz is highlighted by its high-contrast b/w photography and original music by Julien Priester and Sun Ra.

"The Empire Strikes Back" (1980) - The first sequel to "Star Wars" (or to be technical about it, "Episode V"), "Empire" not only introduced a darker view of the struggle between the rebellion and the evil Galactic Empire, but also a romance between mercenary Han Solo and Princess Leia - and a paternal confrontation between Luke Skywalker and Darth Vader.

"The Exorcist" (1973) - William Friedkin's shocking film of William Peter Blatty's bestseller, the movie is extremely graphic when it needs to be, but the tale of a young girl plagued by demonic possession is given resonance by a young priest's simple crisis of faith.

"The Front Page" (1931) - A classic screwball comedy about newspapermen and the lengths to which they will go to get a scoop. The Ben Hecht-Charles MacArthur comedy (which has been filmed several times) stars Adolphe Menjou, Pat O'Brien, Mary Brian and Edward Everett Horton.

"Grey Gardens" (1975) - An elderly woman and middle-aged daughter - the aunt and cousin of Jacqueline Kennedy Onassis - live in a filthy, decaying East Hampton mansion, baring their eccentricities for the cameras of documentarians Ellen Hovde, Albert & David Maysles and Muffie Meyer.

"It's a Gift" (1934) - Comedian W.C. Fields is again tormented by a hen-pecking wife and dastardly children, while taking over a despondent orange grove.

"Let There Be Light" (1945) - John Huston's documentary about returning World War II vets and their treatment at a psychiatric hospital was banned by the War Department for 35 years.

"Lonesome" (1928) - A boy (Glenn Tryon) and a girl (Barbara Kent) meet on Coney Island, fall for each other, then are tragically separated. A simple story, Pal Fejos' silent tale (reworked into a quasi-sound version) captures the period amusement park with real energy, and their blossoming romance with realistic awkwardness. Though the original silent version was lost, a French print of the sound version, with color-tinted sections, was the basis of a recent restoration.

"Make Way for Tomorrow" (1937) - Leo McCarey's tale of an elderly couple losing their home to foreclosure, who are forced to separate and live with children who don't want them around, is tellingly current - and timelessly moving. Victor Moore and Beulah Bondi star.

"Malcolm X" (1992) - Denzel Washington's bravura, Oscar-nominated performance perfectly captures the breadth of life experience by the outspoken civil rights activist whose prison conversion and eventual break from the Nation of Islam led to his assassination in 1965.

"McCabe and Mrs. Miller" (1971) - Warren Beatty and Julie Christie star in Robert Altman's gritty tale of a gambler and brothel keeper in an Old West mining town who come up against intrusive corporate interests.

"Newark Athlete" (1891) - This film fragment from the Thomas Edison laboratories depicting a boy exercising with Indian clubs - created by W.K.L. Dickson and William Heise - was photographed by a horizontal-feed kinetograph camera using 3/4-inch-wide film. It's the oldest footage yet named to the Registry.

"Our Lady of the Sphere" (1969) - Larry Jordan's uses a Pythonesque animation style combining symbols of antiquity and sci-fi elements in a collage echoing "The Tibetan Book of the Dead."

"Saturday Night Fever" (1977) - Maybe disco IS forever. In any event, this box office hit starred John Travolta as Brooklynite Tony Manero, who faces challenging questions about what to do with his life beyond the dance floor and its best-selling soundtrack by The Bee Gees.

"A Trip Down Market Street" (1906) - Strap a camera onto a cable car for a ride through downtown San Francisco, and viewers will see a bustling metropolis unaware of the catastrophic earthquake and fire it would soon suffer.

Since 1989, film professionals, historians, critics and the public have nominated films for the Registry, with the final choices selected by Billington.

This year's additions bring the total number of titles on the Registry to 550.