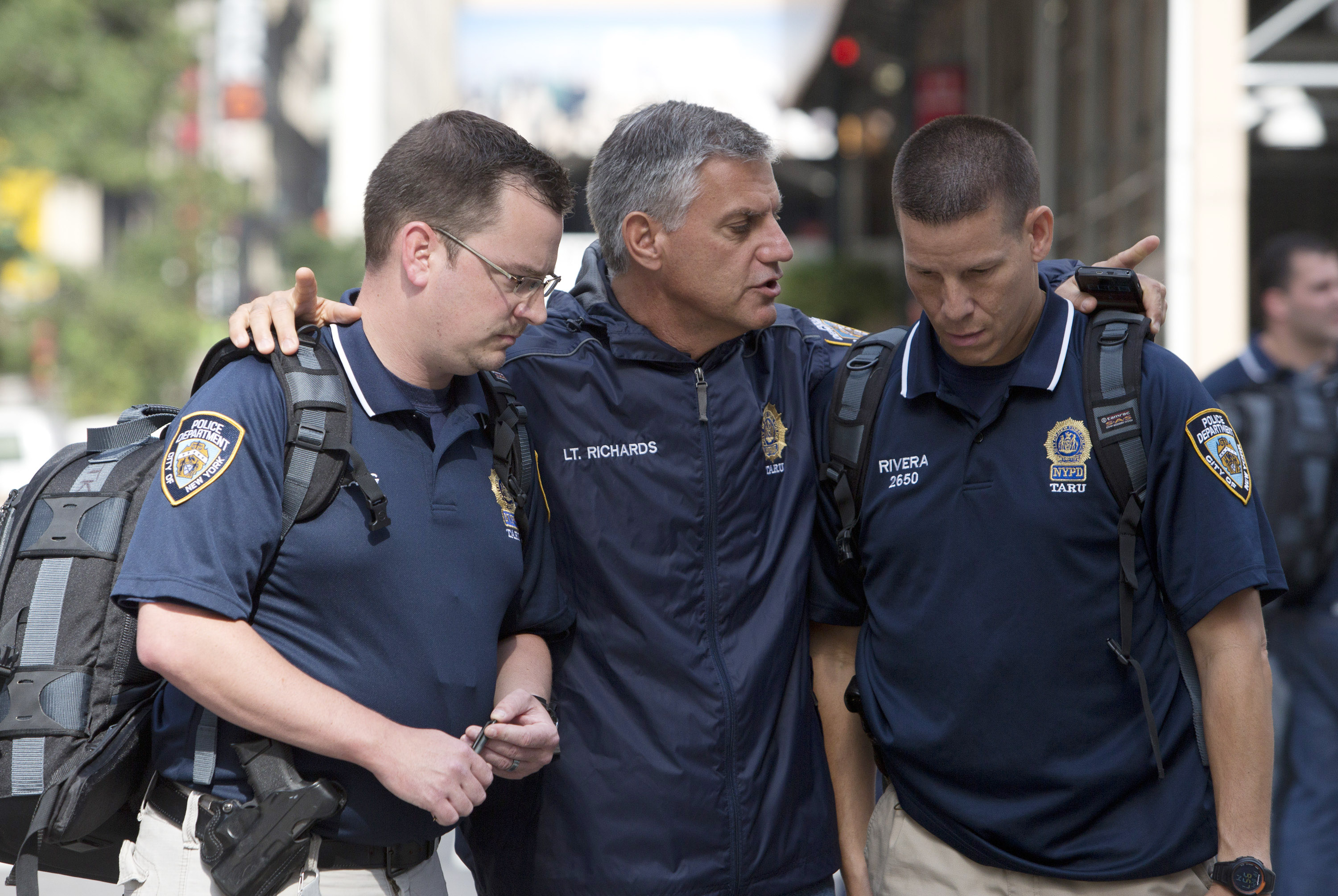 (CBS) NEW YORK - On Tuesday, New York City mayor Michael Bloomberg snapped at a reporter who asked him what he thought about the fact that some of the bullets police fired at Jeffrey Johnson, the man who killed his former boss last Friday morning outside the Empire State Building, ended up hitting civilians.

According to the New York Daily News, Bloomberg defended the officers, saying they acted "more than appropriately."

The officers who took down the armed man on a busy midtown street fired a total of 16 rounds, producing 10 bullet holes in Johnson, according to the New York Police Department. Nine bystanders were reportedly injured by bullets and bullet fragments.

Other than Johnson, who died on the scene, no one was seriously injured in the shooting. But the incident has sparked discussion about why many of the bullets fired by officers didn't actually hit their target.

It turns out that the officers' "hit ratio" on Friday was almost twice as good as the department's average. According to a 2008 analysis of NYPD firearms discharge data done by the New York Times, between 1996-2006 officers hit their intended target about 34 percent of the time.

Another analysis, published in 2006 by the RAND Center on Quality Policing at the request of Police Commissioner Raymond Kelly, found that in the years 1998-2006, the average hit ratio for officers involved in a shooting where the subject does not fire back was 30 percent. During a gunfight, where the target is shooting at officers, the study reported that the hit rate falls to just 18 percent.

The Times reported that in 2006-2007, Los Angeles police officers hit their targets between 27 and 29 percent of the time, respectively. There is no reliable national data on hit ratio.

According to Thomas Aveni, who has written extensively about police shootings and is executive director of the Police Policy Studies Council, many police agencies do not collect data on officer-involved shootings and that those that do are often reluctant to hand it over to academics, advocates or the press.

In addition, Aveni says that many analyses of the available data fail to parse important elements, such as whether the shootings occur in daylight, how many officers are involved and how close the officers are to their target. His 2003 report on the subject found that shootings involving a single officer have an approximately 50 percent hit ratio, and that low light diminishes police accuracy by up to 30 percent.

Aveni, a long-time police trainer, says that improving police hit ratio has been a decades-long struggle.

"What's been lacking in police circles for years is some measure by which we can see how an officer will perform in a life-or-death situation," says Aveni.

Typically police officers are tested on marksmanship at a firing range where the officer and the targets are still. The problem, says Aveni, is that this kind of test "does not require any judgment or real exertion." In "real life," he explains, an officer will miss most of the time when the target is moving or if there is a physical struggle involved.

But recognizing a disparity between how police are trained to shoot and how they usually end up shooting in the field is one thing - developing training that addresses the issue effectively is another.

Avent says that technology - such as virtual training simulators that allow officers to practice their skills in an "active shooter" situation - has helped some, but that the real challenge is replicating the adrenaline rush and hormonal changes that occur within an officer when he or she is confronted by an armed individual. Having officers run in place and then complete a virtual shooting scenario, or using equipment that fires paintballs at the officer hasn't made much of a difference.

"I've seen guys hold fire when they know they're being critiqued and they know the bullets aren't real," says Aveni.

Eugene O'Donnell, a former New York City police officer who is now a lecturer at John Jay College of Criminal Justice, says that although a better hit rate would be great, because less than 1 percent of police officers ever fire their weapons, focusing too much on firearms training could create an unnecessarily militaristic kind of police force.

O'Donnell says that increased firearms training would mean decreased training in what he calls "soft skills," like conflict resolution, driving, making arrests, and learning the law. It also runs the risk of turning police into soldiers who are constantly "on edge."

"You want Marine snipers?" asks O'Donnell. "That changes the ethos and how people interact with the police."