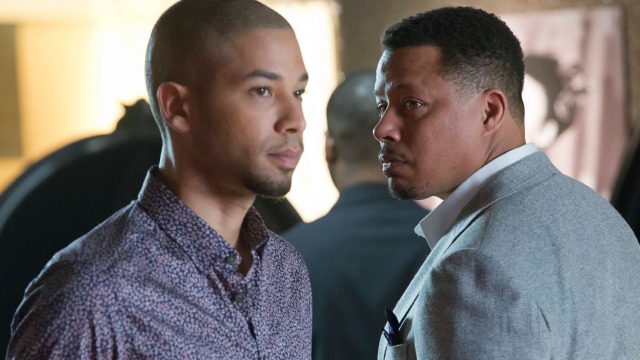 Empire capped its stellar first season of in a big way Wednesday, with more twists and shockers than Cookie's got ways to diss Boo Boo Kitty. The season ended where it began, with a member of the Lyon family behind bars and drama surrounding who's going to take control of Empire Entertainment.

Here's a look at the nine most jaw-dropping moments from 'Die But Once' and 'Who I Am.'

The whole season has been built on Lucious Lyon (Terrence Howard) preparing to leave Empire Entertainment behind when he succumbs to his ALS. Turns out, it was a misdiagnosis. The range of emotions that play across Howard's face when his character finds out that he isn't dying show just how much this news complicates nearly every part of the Empire.

A round of new meds for his (far more treatable) disease leaves Lucious is high and hallucinating when Cookie comes in comes into the bedroom. She hears him confess to Bunkie's murder and learns that he doesn't have ALS after all. So, Cookie decides to take matter into her own hands, nearly smothering her ex with a pillow. Turns out, Lucious wasn't totally out of it, however. When he's handing out apology gifts to his family the next day, Cookie receives a gift-wrapped pillow as a warning.

After slamming his father publicly in a freestyle rap, Hakeem got the business end of Lucious' fist when the two came to blows. After falling out of his father's favor, the youngest Lyon decides to get payback by courting rival record label Creedmore and sleeping with Lucious' scorned ex-fiancee Anika.

Jamal and his father really bonded for perhaps the first time in the finale, going back to their roots as songwriters (and their old house) to create a track together. The song is fire, but Lucious maintains that Jamal still has to prove himself to become the successor to Empire Entertainment. Jamal fulfills this request...by dangling Billy Beretti out of a window until the rival record exec agrees to sign over Lucious' original demos to Empire.

The Empire matriarch should have smothered her ex when she had the chance. Lucious not only cuts her out of the company due to his jealousy over her relationship with Malcolm, but turns Jamal against her when he reveals the security footage of Cookie holding a pillow over him. She doesn't even get to see her name on the marquee at the tribute concert.

"Sometimes you gotta be willing to sacrifice your queen in order to win the game," Lucious tells Jamal coldly as security escorts his ex-wife from the building.

Hakeem and Andre join forces to seize Empire back from Lucious and Jamal, and recruit Cookie and Anika, to help them do so. After a cat fight for the ages, the two women finally agree to work together to take back the company they believe is rightfully theirs.

"I will work with Boo Boo Kitty this time," Cookie concedes, getting in one last jab.

Lucious' right-hand man is out of rehab and ready to help take control of the company back, but he isn't received as warmly as he might have hoped when he shows up on Andre's doorstep. The two come to blows, and when Vernon's got Andre pinned to the ground, Rhonda comes up from behind and bashes him in the head with a candlestick. Andre scrambles to call the police when he realizes Vernon is dead, but Rhonda stops him because, in yet another shocker, she's pregnant.

Lucious and Jamal share a sweet moment before Lucious hits the stage at his tribute concert, when the Empire patriarch finally tells his son that he loves him and reveals his real name, something "Cookie don't even know." The moment is short-lived however, when police bust through the dressing room door to arrest Lucious for Bunkie's murder. Lucious accuses Cookie on his way out, but as he walks past stone-faced Andre and Hakeem, it becomes clear to him who sold him out.

9. The Stars Came Out

Snoop Dogg stopped by to fresstyle and perform "Peaches and Cream" and promote his real-life new album, Rita Ora and Patti Labelle were onstage for the Lucious Lyon tribute concert, and church mouse Jennifer Hudson is preparing to hit the big time. The star-studded cameos weren't exactly shocking, but they were certainly impressive.

The episode and season end with Lucious Lyon sitting in a jail cell, but the drama is far from over.

"You may think you've gotten away with it, but don't fool yourself this is only the beginning," the Empire patriarch fumes in voiceover. "The day will come when Lucious Lyon will return. Game time, bitches."

We can't wait for season two!