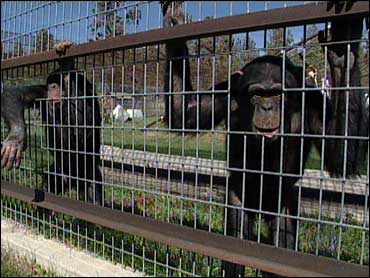 It's not hard to see why people would fight over chimps - especially Jackson and Emma, who've stolen hearts and broken hearts at two sanctuaries.

Muellner runs one of those sanctuaries in Bend Oregon. She took custody of the chimps from a refuge in San Antonio, after Texas authorities charged the animals were neglected, living in overcrowded bug infested cages. And now she's fighting to keep them.

"They're like children. And to see them in such a deprived and neglectful situation, it's heartbreaking," Muellner said.

Lawyers are looking at cases like this to determine not just who's right and who's wrong, but who has rights. Specifically whether animals like Emma and Jackson or dogs and cats have rights - legal rights that courts should protect.

Legal rights for animals? It's not such a radical idea anymore. The nation's top law schools like Columbia, Harvard and Yale are actively discussing ways to expand animal rights.

"Do you think, in our lifetime, we'll see animals get rights that are protected in courts?" Schlesinger asked.

"Yes. Whether or not it's a particularly immediate breakthrough, if it takes another decade, the point is, it's clearly coming," Waldau said.

But the law has not yet caught up with the emotions in Emma and Jackson's case.

Since that rescue last spring, the Texas facility has had a change in management, the state's charges have been dropped, and Stephen Tello is the new man in charge. He denies the animals were mistreated and is building a shiny new home for Emma and Jackson. He says that's proof he's ready to take them back and deserves to.

"It's time for Emma and Jackson to come home. This is their family. We are their natural home," Tello said.

The chimps' fate is in the hands a federal judge. One day the law may require judges to consider what animals want in cases like this but for now, the judge will likely have to decide this case based solely on property rights - who owns Emma and Jackson, not who cares most for them.