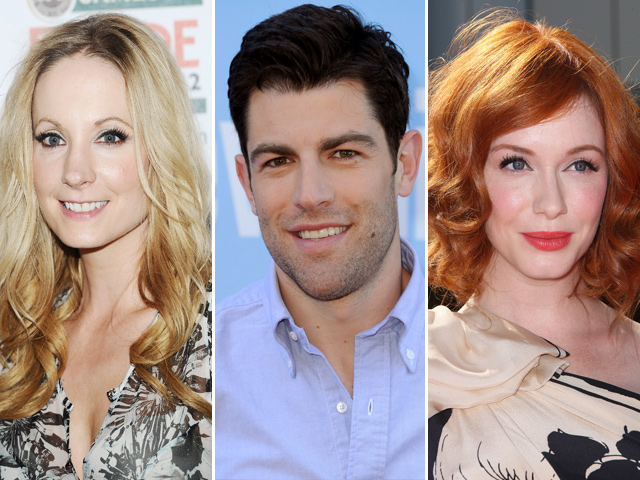 (CBS/AP) All of the Emmy nominees have earned acclaim for their roles on their respective shows, but that doesn't mean there aren't other programs they wouldn't mind landing a guest starring role on.

Here's a look at the shows some Emmy nominees would love to try.

"I'd love to do a guest spot on 'Downton Abbey.' I'm absolutely in love with `Homeland.' I think it's amazing. I would do anything they asked me." - Christina Hendricks, nominated for the third time for playing Joan Harris on "Mad Men."

"Oh God, I don't know. 'Dynasty?' I just want to wear really big shoulder pads and have crazy big hair." - Julie Bowen, who won the supporting actress award for her role as Claire Dunphy on "Modern Family" and is nominated again this year.

"I'm a huge fan of 'Parks and Recreation,' but I think I'd like to do something totally different, like 'American Horror Story.' Oh sure, I'll get killed. That sounds fun. Or I'll play a nun, a spooky nun." - Jesse Tyler Ferguson, enjoying his third consecutive nomination for playing Mitchell Pritchett on "Modern Family."

"I would love to do a part on 'Boardwalk Empire.' I'd have to play some guy that comes out from the West, a new hitter in town." - Bill Paxton, nominated for playing Randall McCoy in the miniseries "Hatfields & McCoys."

"'Homeland' would be at the top of my list. It depends how it goes in series two. Maybe an agent? I'd like to play an FBI or CIA agent." - Joanne Froggatt, nominated for supporting actress for "Downton Abbey."

"I would love to do a guest role on 'Girls.' That show is about as good as it gets." - Max Greenfield, up for supporting actor in the comedy "New Girl."

"I have a classical background. I would love to be on 'Game of Thrones' as some kind of queen coming in to challenge the Starks - wearing all those amazing costumes and wielding a sword. The actors are so good. That would be a dream." - Brenda Strong, nominated for her voiceover work on "Desperate Housewives."

"'Game of Thrones,' but I'm an American, so I don't think that would happen. For that show, I'd go to the moon." - Sarah Paulson, up for her supporting role in the HBO movie "Game Change."

The Emmy Awards will be presented Sunday at the Nokia Theatre and broadcast live on ABC.