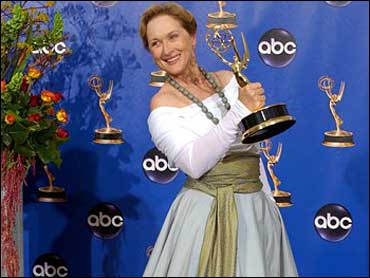 The buzzwords on the red carpet at the Emmy Awards Sunday were "festive" and "glamorous," with many celebrities opting for sleek, retro-style looks.

The Early Show stylist David Evangelista and Suze Yalof Schwartz, executive fashion editor at large for Glamour magazine, did some Monday morning quarterbacking and named the red-carpet hits and misses.

Both loved Heather Locklear's multi-colored gown in a fashionable print. "I can't believe she got that dress," says Schwartz. "That was just on the runways for spring 2005, and that was the dress of the season, so she is a very lucky girl."

Evangelista also liked Patricia Heaton for taking a risk and "thinking out of the box. It was definitely something very different and it was daring and I give her kudos for that." Heaton wore a multicolor, wrap-top Elie Saab gown.

Both also favored the bright green Vera Wang goddess gown worn by Mariska Hargitay. Schwartz said it was her favorite look. "It's so great to see color on the red carpet, which is the ultimate runway, and she definitely looks unbelievable. She's Jayne Mansfield's daughter and she is going to be a very important actress."

As usual "Sex and the City" star Sarah Jessica Parker came up a winner in a strapless black-lace tea-length dress with a feathered skirt and a black sash by Chanel Couture. "I thought she was unbelievable with her see-through," says Schwartz. "And she always looks amazing. She is the chicest actress. The hair that was curly. Straight hair is over, even though I'm wearing it right now. It's always about curly hair."

He also said "Friends" star Jennifer Aniston always looks great. Of her Emmy look, he said, "I liked it. I wasn't like wow about it."

Schwartz, on the other hand, thought Aniston looked "unreal," in a good way.

"I thought it was so unbelievable with her long, wavy curly hair, she looked like a Roman goddess," Schwartz says.

"It is a hard color to wear and for her to pull it off in that statuesque way is incredible," he says. "A little brooch by her side and the split. And the hair and makeup was dead on. She nailed it, I thought."

As for the misses: Barbra Streisand in a too-busy print and Meryl Streep, who Schwartz says "always wears clothes that are too big for her."