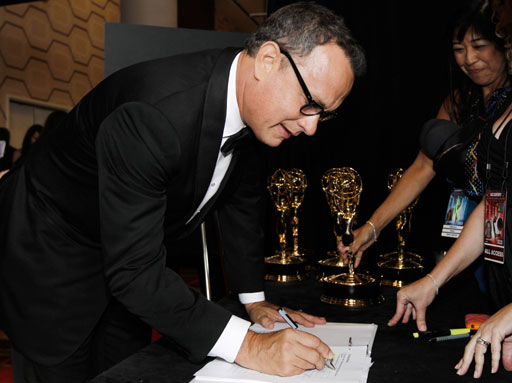 LOS ANGELES (CBS/AP) The cameras don't always catch everything, especially at an awards show as big as the Emmys.

Here's a look at some of the goings-on backstage and in the audience at Sunday night's awards show.

How did Jimmy Fallon go from looking like Elton John at a piano one moment to impersonating Green Day's Billie Joe Armstrong the next? As Fallon paid tribute in song to such bygone programs as "24," "Law & Order" and "Lost," a group of women was standing nearby, waiting to literally rip one costume off him, revealing another underneath.

Fallon's opening musical number went over well with the Emmy audience, which went wild as his makeshift glee club burst onto the stage, with a special cameo by guitar-playing "American Idol" judge Randy Jackson, to perform Bruce Springsteen's "Born to Run." However, Fallon's next comedy bit, reading what were supposed to be funny messages from Twitter-using viewers, fell flat. Fortunately, he quickly returned to the guitar.

They may have put a 40-second time limit on Emmy acceptance speeches, but nobody is counting the seconds - or, for that matter, the minutes, if you're Al Pacino. As the actor went well past his allotted time, ignoring the "Please Wrap it Up" sign that flashed on the TelePrompter, the orchestra didn't dare to play him offstage.

Tom Hanks got so excited about winning an Emmy for "The Pacific," the World War II drama he produced with Steven Spielberg, that he almost forgot to take the trophy home with him. After speaking to a reporter backstage, he began to walk away as someone shouted, "Tom, you forgot your Emmy."

After Ricky Gervais joked that the Emmys could benefit from letting the booze flow a bit more freely, like they do at the Golden Globe Awards, a handful of servers showed up with free beer. Unfortunately, there was only enough to go to the first few rows. Anyone else who wanted a beer had to dash to the lobby during a commercial and shell out $10.75.

Instead of watching commercials like viewers at home, the audience inside the Nokia Theatre was treated to clips of particularly funny and charming past Emmy acceptance speeches. One of them this year was the classic clip of Lucille Ball fumbling about without her glasses before being rescued by Milton Berle, who rushed onstage.

"Parks and Recreation" star Amy Poehler got so caught up mingling with staffers from her old show, "Saturday Night Live," during a commercial break that she barely made it back to her camera-friendly front-row seat in time to trade with her seat filler.

As David Strathairn accepted his Emmy for supporting actor in a movie or miniseries for "Temple Grandin," Jewel quietly took the stage off-camera with her guitar and had a moment alone in the darkness as she prepared to perform "Hole in My Heart" during the tribute to TV industry figures who died this past year. As their pictures flashed on the screen, Gary Coleman, Rue McClanahan and Dennis Hopper got the warmest rounds of applause from the audience.

Don't get him wrong, George Clooney enjoyed that joke scene during the Emmys that put him in bed with Jesse Tyler Ferguson and Eric Stonestreet, who play the gay couple on "Modern Family." But it was good "to talk about things that matter," Clooney said backstage after accepting the Television Academy's Bob Hope Humanitarian Award. The trophy was delivered to him by Julianna Margulies, his love interest on "ER."

After Eric Stonestreet won the Emmy for Outstanding Supporting Actor in a Comedy, his "Modern Family" co-stars Jesse Tyler Ferguson, Ty Burrell and Julie Bowen engaged in an old-fashioned group hug. Jane Lynch and Stephen Colbert experienced a different kind of physicality, however, after Colbert presented Lynch with her Emmy for Outstanding Supporting Actress in a Comedy Series. The pair had to be chased down and grabbed by an Emmy staffer when they exited the stage the wrong way.

The upset of the night, as far as the Nokia Theatre audience was concerned, was when Bravo's "Top Chef" wrestled the Outstanding Reality Competition Program Emmy away from CBS' "The Amazing Race," which had won the award the past seven years running. The most surprised people in the audience? Perhaps the show's host Padma Lakshmi and judge Gail Simmons, who had to race through the audience to meet their colleagues on stage.

Bryan Cranston and his "Breaking Bad" co-star Aaron Paul may have pulled a one-two sweep of the outstanding lead actor and outstanding supporting actor awards for drama series, but they got stuck with just about the worst seats in the Nokia Theatre. The two were seated at the far right end of the stage, directly in front of the orchestra. The cast members of "Glee" had the best seats, center stage.

Many Emmy winners don't want to turn loose of their hard-earned awards. Not Jim Parsons, who collected the Outstanding Lead Actor in a Comedy Series award for "The Big Bang Theory." "I take this with me?" Parsons asked as he arrived at the backstage trophy table to collect his real Emmy, not the one they hand out in front of the cameras. Asked how he planned to celebrate when he got that Emmy home, Parsons said, "Maybe I'll have ice cream."

Inside the Nokia Theatre lobby minutes before showtime, it was chaos. You couldn't hear the audio being piped in from the red carpet outside because of the crush of chatty attendees schmoozing. "Please make your way into the theater!" a security guard finally barked.

Just outside, the lobby's men's room, "The Amazing Race" host Phil Keoghan was wolfing down a bag of popcorn while Seth Meyers of "Saturday Night Live" was fidgeting with his smartphone as the show was about to begin. Across the way, Lauren Graham fiddled with her hexagon-shaped purse as she mingled with the crowd. Kevin McHale from "Glee" chatted with "Dexter" co-stars James Remar and C.S. Lee.

Inside the theater, nominee Terry O'Quinn from "Lost" and Kate Gosslin from "Kate Plus 8" were finding their seats while others stood to watch the last of the red carpet scene as it was broadcast on large television screens.

A little more than three hours later, it was time to clean up, as Jimmy Fallon's attempt to douse the audience with a farewell champagne spritz fell short and mainly just soaked the camera guy who was positioned below him.