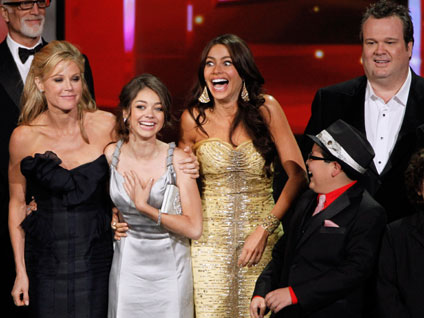 "To our fans, we are so grateful, we are so thrilled that families are sitting down together to watch a television show, and we're so happy that you have let us into your families," said "Modern Family" executive producer Steven Levitan.

The award was the first for the freshman sitcom, which also captured the Outstanding Supporting Actor in a Comedy Series award for Eric Stonestreet and a best writing trophy.

"All I wanted to be was a clown in the circus when I was a kid growing up," said Stonestreet, who plays a boisterous gay dad and partner. He thanked his parents for their support and promised to send his trophy home with them.

"Glee," the musical-comedy that started the night as the most-nominated series, earned an acting trophy for Jane Lynch and a directing award for creator Ryan Murphy.

Lynch thanked show creator Ryan Murphy for "creating this role of a lifetime" when she accepted the Outstanding Supporting Actress in a Comedy Series award from presenter Stephen Colbert. She also thanked her folks along with her wife, Lara Embry. The pair married in Massachusetts in May.

Bryan Cranston's portrayal of a meth dealer in "Breaking Bad" and Kyra Sedgwick's role as a brassy deputy police chief in "The Closer" earned the pair the night's top drama acting honors.

Cranston's award was his third trophy for his role of a high school teacher gone wrong, while his co-star, Aaron Paul, earned his first award as best supporting actor for the series.

"During the time it took me to walk up here, I venture there were 200 text messages to the other nominees saying, 'You were robbed.' I cannot argue with that," Cranston said.

Archie Panjabi of "The Good Wife" was honored as Outstanding Supporting Actress in a Drama Series for her part as a law-firm's in-house private investigator, as Emmy voters spread the riches widely among veterans and fresh faces.

Edie Falco of "Nurse Jackie" and Jim Parsons of "The Big Bang Theory" were recognized with the awards for their comedy series lead roles.

Parsons ended the two-year streak held by Alec Baldwin for his role on "30 Rock" and beat out other heavyweights including Tony Shalhoub, nominated for the final season of "Monk" and a three-time winner, and Steve Carell of "The Office."

"Now I know how much I didn't think this was going to happen. Some of you apparently voted for me. That was very sweet," Parsons told the theater audience.

Falco's trophy for her role as a tough but troubled nurse came after her hallmark role as a mob boss' wife in "The Sopranos," for which she won three best drama actress Emmys.

"Oh, this is the most ridiculous thing that has ever happened in the history of this awards show. I'm not funny!" Falco said as she accepted her award.

Jon Stewart's "The Daily Show" won its eighth consecutive Emmy Award for Outstanding Variety, Music or Comedy series. The victory kept Conan O'Brien from claiming an Emmy for his short-lived stint as "Tonight" host and also deprived nominee "Saturday Night Live" of a trophy for its episode with host Betty White (though White took home the Emmy for Outstanding Guest Actress in a Comedy Series for her stint hosting the show at last weekend's Creative Arts Emmys).

George Clooney accepted the Bob Hope Humanitarian Award from his former "ER" co-star, Julianna Margulies, who lauded his fundraising efforts for victims of this year's earthquake in Haiti, the 2004 tsunami in Indonesia and the Sept. 11 terrorist attacks.

Clooney, recalling evenings spent with Hope and his wife, Dolores, at the home of his aunt, singer Rosemary Clooney, called the couple his inspiration.

"If you look at everything they accomplished in their lives ... They're the best version of the term 'celebrity,'" Clooney said.

"Temple Grandin," based on the life of the gifted, autistic animal sciences expert, was honored as best TV movie and earned Emmys for its star, Claire Danes, and supporting acting trophies for Julia Ormond and David Strathairn. The film's director, Mick Jackson, also received recognition.

Al Pacino was honored as best lead actor in a miniseries or movie for "You Don't Know Jack," about euthanasia advocate Dr. Jack Kevorkian, who was in the audience and stood, smiling, at Pacino's request. The controversial physician received scattered applause.

Host Jimmy Fallon opened the show on a musical note, performing a song-and-dance number with the cast of "Glee" and a wildly mismatched group of celebrities including Jon Hamm and Tina Fey.

There was also an appearance by Kate Gosselin in her "Dancing with the Stars" costume (the group declined to let her join their makeshift glee club), and Betty White, who showed Hamm some sexy dance moves.

Much of the group ended up on stage at the Nokia Theatre to kick off the awards with a high-energy version of "Born to Run," with Fallon on guitar performing with "American Idol" judge Randy Jackson.

"Tonight we're going to celebrate your work," Fallon told the audience. "So let's have some fun tonight."

The public had a hand in writing some of Fallon's material through Twitter.

The show aired live nationwide after three decades of tape-delay broadcasts for the West Coast.

HBO came into the ceremony as the kingpin after claiming 17 awards at the Aug. 21 creative arts Emmys, followed by ABC with 15 and Fox with nine. CBS, NBC and PBS each claimed seven.

By the show's end, HBO again was on top with eight trophies. AMC received four, ABC and CBS had three and Fox and Showtime had two. NBC, Comedy Central, Bravo and TNT earned one award each.

"The Pacific," the World War II drama produced by Tom Hanks and Steven Spielberg, received the best miniseries award in a category it shared with one other nominee, "Return to Cranford." "The Pacific" was the was the top nominee with 24 bids and captured a leading seven creative arts awards, which recognize technical and other achievements.