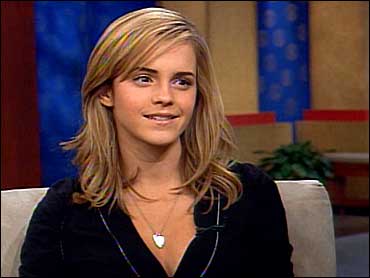 Emma Watson used to be simply known as Hermione Granger, the character she plays in the beloved Harry Potter movies. But now, as fans are flocking to the fifth movie, she said she is finally being recognized as "Emma" by fans.

"When I was younger everyone was like, 'Hermione, Hermione,' and now everyone is like 'Emma, Emma,' " she told The Early Show co-anchor Harry Smith. "Everyone knows my name and, to me, that's surreal."

In "Harry Potter and the Order of the Phoenix," Hermione Granger helps Harry create the top secret Dumbledore Army to fight against the evil Lord Voldemort.

Six years after the first movie, some reviewers are calling this the best Potter flick yet. One of the many appealing aspects of the movie is that it features plenty of flashbacks that show the actors when they were younger. When Watson sees the flashbacks, she sees a little girl with chubby cheeks and wild hair, she told Smith.

"It's really weird," she said. "It's so strange. Like so many, as you say, there are so many flash backs in this one. I remember watching it and thinking, 'Wow, we have changed so much.' It's amazing. It's kind of painful in a way because it's kind of embarrassing but at the same time. It's like, oh, yeah we were cute."

Besides acting in the movies, Watson is an avid reader of the "Harry Potter" series, so she knew exactly what parts of the book were left in for the movie and what was cut out.

"Well, I was particularly excited about the house spells and just that whole storyline of taking care of the house and all of it got cut," she said. "None of it made it ... I was really upset."

Disappointment aside, Watson said one of her favorite activities is watching the movie with an audience that has not yet seen it.

"I've seen the film four or five times now … I tend to just turn around in my seat and not watch the film but just watch everyone else's reaction because it's so rewarding to see which bit people laugh at, which bit they enjoy or which bits they cried at," she said.

Although she is on the on the path to stardom, Watson has decided to stay in school and continue her education. Yet she is also growing as an actress and person. Watson said she has been very lucky to experience things she never would have otherwise.