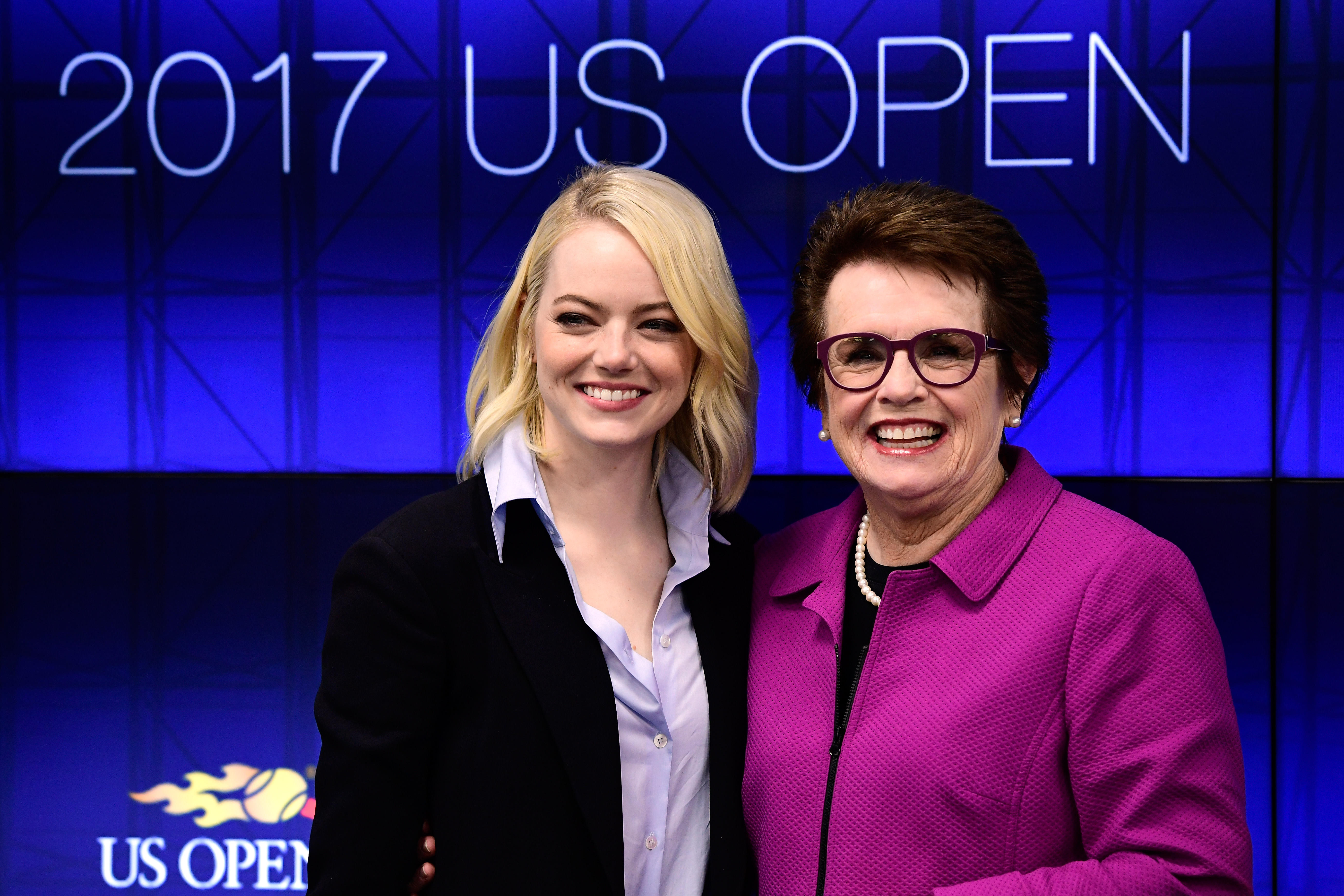 TORONTO -- Emma Stone is taking cues from a King -- Bille Jean King, that is. The two spent time together during the U.S. Open, where King talked to the young actress on fighting against the gender pay gap.

Walking through a tunnel alongside King at the grounds of the U.S. Open, Stone gasped at the size of its main court.

King, of course, was more familiar with the sprawling tennis center in Queens, New York -- it's named after her, after all (the stadium itself is named after another tennis legend, Arthur Ashe). But as accustomed as Stone is to the spotlight, her playing fields are usually private film sets or more intimate television show audiences. In making "Battle of the Sexes," a new film about King's infamous 1973 showdown with Bobby Riggs (Steve Carell), Stone was often both awed and a little jealous of the stages on which King crusaded for sport and for women's rights. (King helped win equal prize money for women at the U.S. Open that same year.)

In tennis, the lines are clear, the scoreboard is final and a landmark victory against sexism could go down in straight sets.

"It's just such a longer conversation in the movie industry," Stone said in an interview shortly after watching the women's finals with King earlier this month, which saw Sloane Stephens capture the trophy. "When I look at a tennis match, whoever wins at the end, the prize money should be equal. There are so many moving parts in how that comes to pass on a film to film basis. But of course things need to be changed."

"Battle of the Sexes," which Fox Searchlight will release Friday, is in some ways a time-traveling experience back to the 1970s and the chauvinism of another era. But the film, directed by Jonathan Dayton and Valerie Faris, also seems very much of today, coming less than a year after a bruising presidential election often fought over gender lines. And King's fight for pay equality -- she helped launch the female-only Virginia Slims tennis circuit after objecting to the disparity between male and female prize money -- also has clear reverberations for Hollywood's own issues in compensating men and women equally.

Stone has spoken about pay equality in Hollywood. In July, she said she has previously insisted male co-stars close the pay gap by cutting their salaries. She acted out of inspiration from King and some of her own contemporaries, like Jennifer Lawrence. Lawrence penned an essay in 2015 about pay disparity after emails from the Sony hack revealed she had been paid less than her male co-stars in "American Hustle."

"It becomes a difficult topic just for me because other people might have answers that I haven't come to in fixing the industry at large, but because of the circumstantial nature of it -- the way the budgets inflate or go down from movie to movie, or year to year the way a person's career moves," Stone said.

"Every industry should be thinking about that," added the 28-year-old actress. "It's my world. Tennis is Billie Jean's world. But it matters across the board."

A recent list by Forbes magazine of the highest-paid stars in Hollywood ranked Stone as the highest-paid woman. Fourteen male actors ranked higher. The gap reflects larger industry inequalities. Of the 4,583 speaking characters in last year's top 100 films, 31.4 percent were female - roughly the same rate as in 2007, according to a study by the University of Southern California. Only 34 of those films depicted a female lead or co-lead.

"I did talk to Emma about the industry: Do you want to make a difference?" said King, who won 39 major titles in her career, including 12 in singles. "I don't know if this movie has helped her have self-confidence or more empowered. I hope it helps her. I think it's still very relevant still. Equality for everyone is so far away. Every generation has to really fight for it more and more. We have made progress but I think women have at least another 175 years before we might be equal, have equal pay."

The makers of "Battle of the Sexes" wanted the film to stand apart behind the camera as well.

"On our movie, there was a distinct effort to pay everyone equally," said Dayton. "Our crew was a really great mix of men and women in all departments. Our editor is a woman. Our production designer is a woman. The sound mixing team, both women."

"We always have a good mix that way," added Faris. "I guess it starts with us."

Their film melds the public spectacle of King and Riggs' faceoff with the personal struggles both were dealing with leading up to the match. King -- then 29, married and the No. 1-ranked player in the world -- was in the midst of embracing her homosexuality, which she would reveal years later. The 55-year-old Riggs, who died in 1995, isn't merely a chauvinist stereotype, but is seen going through his own marital problems.

"What we loved about this story was that it showed how much you can do within your own field or profession," said Faris. "Everyone is talking about parity within actor salaries. I think probably with directors, we're not close to having parity. In general, we're always going to have to work to achieve some kind of equality. It's a battle that you probably never even win."

"Battle of the Sexes" has been warmly received by critics and some believe it has definite Oscar chances. The film has certainly won over King, as has Stone, whom King praises as "sensational."

"We have the same middle name. Same month we were born. We both knew what we wanted to do at a young age," says King. When she heard Stone was working with a dialect coach, she protested: "You already sound exactly like me!"