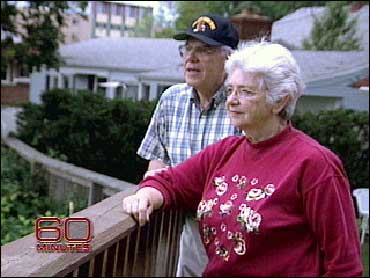 Just about everyone knows that under a process called eminent domain, the government can (and does) seize private property for public use - to build a road, a school or a courthouse.

But did you know the government can also seize your land for private use if they can prove that doing it will serve what's called "the public good"?

Cities across the country have been using eminent domain to force people off their land, so private developers can build more expensive homes and offices that will pay more in property taxes than the buildings they're replacing.

Under eminent domain, the government buys your property, paying you what's determined to be fair market value.

But now, people who don't want to sell their homes at any price - just to see their land go to another private owner - are fighting back. Correspondent Mike Wallace reports on this story, which first aired last fall.

Jim and Joanne Saleet are refusing to sell the home they've lived in for 38 years. They live in a quiet neighborhood of single-family houses in Lakewood, Ohio, just outside Cleveland.

The City of Lakewood is trying to use eminent domain to force the Saleets out to make way for more expensive condominiums. But the Saleets are telling the town, "Hell no! They won't go."

"The bottom line is this is morally wrong, what they're doing here. This is our home. And we're going to stay here. And I'm gonna fight them tooth and nail. I've just begun to fight," says Jim Saleet.

"We talked about this when we were dating. I used to point to the houses and say, 'Joanne, one of these days we're going to have one of these houses.' And I meant it. And I worked hard."

Jim Saleet worked in the pharmaceutical industry, paid off his house and then retired. Now, he and his wife plan to spend the rest of their days there, and pass their house on to their children.

But Lakewood's mayor, Madeleine Cain, has other plans. She wants to tear down the Saleets' home, plus 55 homes around it, along with four apartment buildings and more than a dozen businesses.

Why? So that private developers can build high-priced condos, and a high-end shopping mall, and thus raise Lakewood's property tax base.

The mayor told 60 Minutes that she sought out a developer for the project because Lakewood's aging tax base has been shrinking and the city simply needs more money.

"This is about Lakewood's future. Lakewood cannot survive without a strengthened tax base. Is it right to consider this a public good? Absolutely," says the mayor, who admits that it's difficult and unfortunate that the Saleets are being asked to give up their home.

The Saleets live in an area called Scenic Park, and because it is so scenic, it's a prime place to build upscale condominiums. With great views, over the Rocky River, those condos will be a cinch to sell.

But the condos can't go up unless the city can remove the Saleets and their neighbors through eminent domain. And to legally invoke eminent domain, the city had to certify that this scenic park area is, really, "blighted."

"We're not blighted. This is an area that we absolutely love. This is a close-knit, beautiful neighborhood. It's what America's all about," says Jim Saleet. "And, Mike, you don't know how humiliating this is to have people tell you, 'You live in a blighted area,' and how degrading this is."

"The term 'blighted' is a statutory word," says Mayor Cain. "It is, it really doesn't have a lot to do with whether or not your home is painted. ...A statutory term is used to describe an area. The question is whether or not that area can be used for a higher and better use."

But what's higher and better than a home? "The term 'blight' is used to describe whether or not the structures generally in an area meet today's standards," says Cain.

And it's the city that sets those standards, so Lakewood set a standard for blight that would include most of the homes in the neighborhood. A home could be considered blighted, says Jim Saleet, if it doesn't have the following: three bedrooms, two baths, an attached two-car garage and central air.

"This community's over 100 years old. Who has all those things? That's the criteria. And it's ridiculous," says Jim Saleet. "And, by the way, we got up at a meeting and told the mayor and all seven council members, their houses are blighted, according to this criteria."

Cain admits that her house doesn't have two bathrooms, a two-car garage and the lot size is less than 5,000 square feet.

The Saleets may live in a cute little neighborhood, but without those new condos, the area won't produce enough property taxes to satisfy the mayor and city council.

"That's no excuse for taking my home. My home is not for sale. And if my home isn't safe, nobody's home is safe, in the whole country," says Jim Saleet. "Not only Ohio. But this is rampant all over the country. It's like a plague."

Dana Berliner and Scott Bullock are attorneys at a libertarian non-profit group called The Institute for Justice, which has filed suit on behalf of the Saleets against the City of Lakewood. They claim that taking private property this way is unconstitutional.

"This is a nationwide epidemic," says Berliner. "We have documented more than 10,000 instances of government taking property from one person to give it to another in just the last five years."

And it's not just people's homes that are the targets in these eminent domain cases. The Institute for Justice has also filed suit against the City of Mesa, Ariz., to save Randy Bailey's Brake Repair Shop - the shop he got from his father and hopes to someday pass on to his son.

The City of Mesa, citing the need for "redevelopment," is trying to force Bailey to relocate to make way for an Ace Hardware Store that would look better and pay more taxes.

"Redevelopment to me means work with existing people who are there and redevelop. Not, 'You get out! We're bringing this guy in,'" says Bailey, whose business has been on the same corner for more than 30 years.

Business has been awesome, Bailey says. But now, he says they're going to turn his business into dirt. In fact, the city has "made dirt" out of three restaurants and four businesses that once stood on a five-acre lot.

"And it's not just business properties that they're going this on. You know, they wiped out eight people's homes over here. Your home ain't even safe," says Bailey, who told 60 Minutes that his neighbors let the city buy them out.
But he's refusing to sell: "I'm standing in their way. I'm their thorn in their side."

And he's a thorn in the side of Ken Lenhart, who owns the Ace Hardware Store a few blocks away. Lenhart wants a much bigger store. He could have negotiated with Bailey, but instead, he convinced the City of Mesa to try to buy Bailey's land through eminent domain and then sell it to him.

"The City of Mesa wants to move Mr. Bailey about a block away, and from what I understand it's gonna be a new building, new equipment, moving expenses and everything set up for him," says Lenhart. "I don't see how Mr. Bailey is gonna get hurt."

"You can't replace a business being in the same location. This place was built in 1952 as a brake and front-end shop," says Bailey. "I don't care where you move it in the City of Mesa, it would never be the same."

So Bailey went to Lenhart looking for a way to stay on his corner.

"I tried to go to him and see if we couldn't work something out on this. And he told me, 'No, there ain't room for you there. We're gonna let the city just take care of you,'" says Bailey.

Lenhart admits that he never tried to negotiate with Bailey: "It happens all over the country. In practically any town you want to go to, they're redeveloping their town centers. Now, we are going to sit in Mesa, Arizona and have our town center decay? As a citizen of Mesa, I don't want that to happen."

But Bailey says his business was on private property, and not for sale: "If I'd had a 'For Sale' sign out there, it would have been a whole different deal. And for them to come in and tell me how much my property's worth and for me to get out because they're bringing in somebody else when I own the land is unfounded to me. It doesn't even sound like the United States."

And this isn't happening just in small towns. In New York City, just a few blocks from Times Square, New York State has forced a man to sell a corner that his family owned for more than 100 years. And what's going up instead? A courthouse? A school? Nope. The new headquarters of The New York Times.

The world's most prestigious newspaper wants to build a new home on that block, but Stratford Wallace and the block's other property owners didn't want to sell. Wallace told 60 Minutes that the newspaper never tried to negotiate with him. Instead, The Times teamed up with a major real estate developer, and together they convinced New York State to use eminent domain to force Wallace out. How? By declaring the block blighted.

"I challenge them," says Wallace. "This is not blighted property."

But New York State's Supreme Court disagreed and ruled that the newspaper's new headquarters would eliminate blight - and that even though a private entity (The New York Times) is the main beneficiary, improving the block would benefit the public.

Executives from The New York Times wouldn't talk to 60 Minutes about it on camera.

Back in Lakewood, Ohio, Jim and Joanne Saleet are still waiting for their court decision. Most of their neighbors have agreed to sell if the project goes ahead. But the Saleets, plus a dozen others, are hanging tough.

"I thought I bought this place. But I guess I just leased it, until the city wants it," says Jim Saleet. "That's what makes me very angry. This is my dream home. And I'm gonna fight for it."

He fought, and he won. In separate votes, Lakewood residents rejected the proposed development, removed the "blight" label from the Saleets' neighborhood, and voted Mayor Cain out of office.

In Mesa, Ariz., Randy Bailey can keep his brake shop right where it is. The week after this report aired, Arizona's Court of Appeals ruled that turning his land over to a hardware store would not be a proper use of eminent domain.
But in New York City, tenants and owners have been forced off their land so The New York Times can begin building its new headquarters.

Facebook's response to 60 Minutes' report, "The Facebook Whistleblower"
Thanks for reading CBS NEWS.
Create your free account or log in
for more features.
View CBS News In
CBS News App Open
Chrome Safari Continue
Be the first to know
Get browser notifications for breaking news, live events, and exclusive reporting.