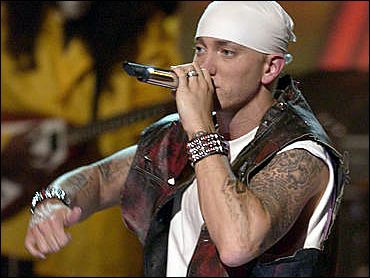 A tour bus for rap star Eminem crashed and overturned after hitting two trucks on an interstate highway, police said. Eleven people were injured, including the star's DJ, bodyguard and a protégé, the rapper Stat Quo.

Eminem, whose real name is Marshall Mathers III, was not on the bus, his publicist said. His Anger Management Tour was expected to go as scheduled Thursday night in Denver.

The Missouri State Highway Patrol said the bus was traveling at a high rate of speed when it ran off the road Wednesday night to avoid a collision with a semitrailer, then swerved back onto the roadway and hit the truck.

The bus then hit another semitrailer and overturned. One of the truck drivers estimated the bus was traveling at 85-90 mph. An investigation was under way.

The crash occurred on Interstate 70 near Odessa, about 25 miles east of Kansas City, and was headed to Denver from Chicago, where the tour performed Monday night.

At least seven people from the tour were taken to the hospital; four others, including three on motorcycles, also went to the hospital, according to the highway patrol.

A 37-year-old motorcyclist was in serious condition; no information was released on his passenger, at the patient's request, authorities said. There were no other serious injuries, the patrol said.

Among those injured was Eminem's DJ Alan Maman, also know as Alchemist; the 27-year-old from New York City was listed in good condition Thursday.

Stanley Benton, 26, a rapper who goes by the name Stat Quo and is considered one of Eminem's protégés, was treated and released. He was scheduled to perform Thursday in the show, which features Eminem, 50 Cent, G-Unit, Lil Jon & the East Side Boyz, D-12 and Obie Trice.