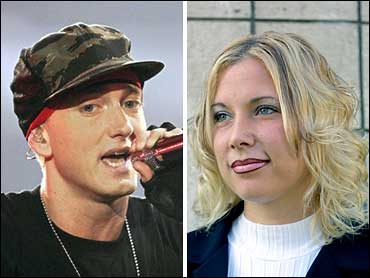 Eminem's dysfunctional relationship with wife Kim has hit another low — he filed divorce papers Wednesday, less than three months after remarrying her.

The Grammy- and Oscar-winning rapper and Kim Mathers remarried Jan. 14, a month after the couple announced they were getting back together.

Their first marriage ended after two-plus years in October 2001 in an ugly legal fight that included a custody battle over their daughter, Hailie.

Though the marital issues of most rappers wouldn't make headlines, Eminem has used his tormented relationship with Kim, his high school sweetheart, as a source of his most popular and demented rhymes. He's killed her off in song and assailed her with his lyrics — but that was before they got back together.

The pair grew up in the suburbs along Eight Mile Road, Detroit's northern border.

Last August, it was announced that Eminem had entered a hospital to undergo treatment for sleep medication dependency. A month earlier, he denied reports that he was preparing to retire from recording.

Eminem rose to pop stardom by delivering a number of best-selling CDs, deeply personal lyrics and a starring role in the 2002 film "8 Mile."

He has won nine Grammys, including best rap album for "The Slim Shady LP," "The Marshall Mathers LP" and "The Eminem Show." He won an Oscar for the song "Lose Yourself" from "8 Mile."