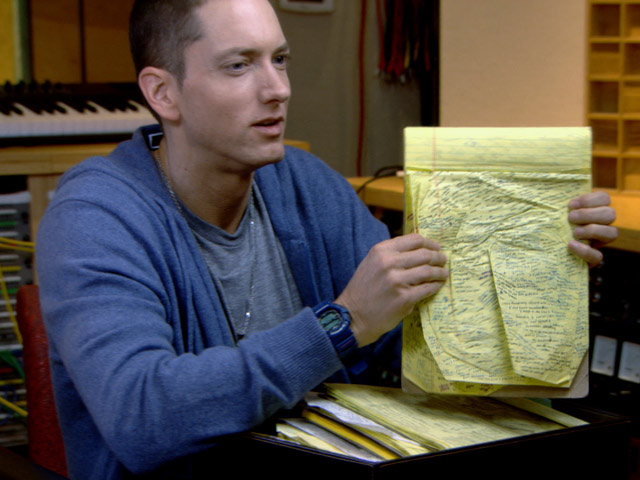 What's the fastest way to draw a crowd in Detroit? Have CNN's Anderson Cooper and rap star Eminem walk down a city sidewalk with "60 Minutes" cameras trailing.

In this week's episode of "60 Minutes Overtime," you'll tag along as Eminem gives Cooper a tour of his old haunts in Detroit, including the neighborhood where the musician grew up near 8 Mile. The unlikely pair also makes a stop at the local Burger King that played a big role in young Marshall Mather's life - both as a refuge and a kind of fast-food writing lab.

Cooper and Eminem developed a rapport over the weeks that it took to shoot the story. When our correspondent convinces the rapper to do some freestyle rhyming in his private recording studio, Eminem does an impromptu rap about Anderson. It's not a full-on battle or beat down, but Anderson admits that Eminem lands a "glancing blow."

But the knock-out comes later. Also in this episode, watch Eminem do his own version of what we call the 60 Minutes "I'ms" (as in "I'm Steve Kroft; I'm Lesley Stahl; I'm Bob Simon...") Check it out and tell us what you think.