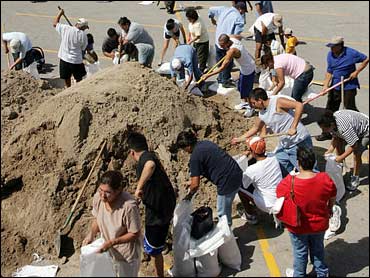 South Texas residents boarded up windows, put sandbags in flood-prone areas and moved their RVs from the edge of a beachside park that could be swamped by Hurricane Emily.

"Your luck can't be that good all of the time and we've been lucky," Cameron County park Ranger Arnold Flores said Monday. "We haven't been hit like Florida has."

Flores was trying to get the last of the die-hard campers to move their RVs from a park on the edge of South Padre Island's beach.

"We started telling people they need to leave because we don't want to be responsible for someone getting hurt or something they could have avoided," he said.

Emily slammed into Mexico's Yucatan Peninsula early Monday with strong winds, leaving behind flooding and other damage. Forecasters expected it to regain force over the Gulf of Mexico and hit the northeastern Mexican coast "as a major hurricane," as early as Tuesday night.

Despite that projected path, the storm could still hit the southern tip of Texas, prompting many tourists on South Padre Island to pack up.

Hundreds of people in recreational vehicles were ordered to leave county parks on the island.

One of those was Henry Barrientes, who needed help from friends with a forklift and a semi-truck to haul his 34-foot vacation trailer away to a warehouse in Brownsville.

"We've done this so many times and nothing has happened," Barrientes said, expressing frustration that he was going to all this trouble for a storm that may bring only wind and rain. "We have been thinking how we were going to move it all summer long."

Authorities are monitoring the hurricane and plan to make a decision about whether to order further evacuations.

A total of 225 soldiers of the Texas Army National Guard were activated in case they are needed for hurricane duty. An additional 100 Texas State Guard personnel are on standby.

Given the unpredictable nature of hurricanes, Carlos Acevedo, director of Cameron County's emergency communications district, said many South Texas residents were loading up on water, batteries and canned food, boarding up windows and removing any debris that the storm could sweep up and turn into a deadly projectile.

"It's just like having a baby," Acevedo said. "You know it is coming, but you don't know what to expect. It's not frustrating, but just an antsy feeling, just a feeling that something is pending - something that is going to require a lot of work once it does come our way."

The guessing game is in the past along Mexico's Mayan Riviera, where Emily ripped roofs off luxury hotels, stranded thousands of tourists and left hundreds of local residents homeless, forcing many to remain in crowded, leaky shelters.

From the port of Tampico to the southern Texas coastline, residents boarded up windows and evacuated low-lying areas. Mexico's state-run oil company, Petroleos Mexicanos, or Pemex, evacuated 15,000 oil workers from rigs in the storm's path.

The worst damage on the Yucatan Peninsula was in Tulum, a collection of thatched hut hotels along a secluded strip of beach that is popular with backpackers, and in Puerto Aventuras, where the storm's eye came ashore some 60 miles south of the resort of Cancun.

In Puerto Aventuras, Remigio Kamul, 21, surveyed the remains of his family's collection of five shacks. Only a brick room remained standing.

"We just want to have a roof over our heads again," he said.

Quintana Roo state officials reported little damage to the ancient pyramids in Tulum or elsewhere, but a team of archaeologists is inspecting sites throughout the state.

The National Hurricane Center in Miami said Emily made landfall near Tulum - 100 miles south of Cancun. The northern eyewall - where the worst weather would be expected - passed directly over Cozumel.

Power was knocked out all along the coast as the wind snapped utility poles and shattered plate glass windows between Playa del Carmen and Cancun.

President Vicente Fox visited the island of Cozumel and other affected areas, saying the hurricane "has really allowed us to put to the test the capacities of the country in terms of risk prevention."

"I think we have demonstrated that they are very far-reaching and capable," he added.

About 60,000 tourists evacuated over the weekend from Cancun, Tulum, Playa de Carmen and Cozumel emerged Monday from makeshift shelters and began scrambling to find ways back home.

Emily hit Mexico after sweeping across the Caribbean, causing flooding that killed a family of four in Jamaica but sparing the Cayman Islands major damage.

Mexico's two main crude oil loading ports in the Gulf were closed and Pemex evacuated its Bay of Campeche oil rigs, shutting down offshore production as the hurricane approached.

A Pemex helicopter being used for the evacuation crashed Sunday while trying to land on a platform in high winds, killing the pilot and co-pilot.