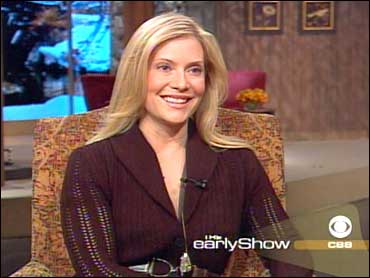 "CSI: Miami" is one of TV's biggest hits, with some 20 million viewers tuning in each week of this, its fourth season.

One reason for its success is Emily Procter, who plays ballistics expert Calleigh Duquesne.

admits
to The Early Show co-anchor Rene Syler she's still surprised at the way the show caught on. "There are still moments where I'm flying and people say, 'I watch the show.' And I'm like, 'Thank you.' It's amazing."

That success has made it possible for Procter to spread her wings in ways that are, in some instances, a bit unlikely.

For instance, the show now has its own board game, and Procter says, "Every time I see my piece, I just want to brush my hair!"

And she plays poker, on one of the TV poker shows.

"I feel like 'CSI: Miami' was just a license to do all sorts of horrible things that I'd always wanted to do," she kidded with Syler.

In a more conventional offshoot, Procter is starring in "Big Momma's House 2," with Martin Lawrence. It hits theaters Friday.

"It's basically a sequel," she says."I'm a harried mother of three and looking for help in the house. And they suspect my husband is leaking information from the government. So Big Mama comes in, Martin, to take the job. But then, to watch the husband. And I have to say, we had the best time. I loved it."

This season, the characters in "CSI: Miami" are dealing with an office mole who's leaking things to the press and others.

Procter tells Syler even the cast members don't know who the mole will turn out to be: "I have no idea. Absolutely no idea. And I'm very upset about it because, for four years together... And our show especially, we had growing pains, and I'd have to say, four years in, we just adore each other. And I don't want anything to happen to anyone. So I feel incredibly nervous."

"You mean," Syler asked, "like that maybe is going to get carted away and go to jail because they are the mole?"

"I hope not," Procter responded, adding cast members are saying to each other, " 'I hope it's not you.' "

After all this time, is she able to shake off the material she deals with on the set all day when she goes home?

"When we started, I was like, 'I'm upset. It gives me nightmares. I don't know what to do.' And now, I'm just like, 'Oh, I like your top. You think that blood's going to come out of there?'

Procter says Callie shares some traits with the woman who portrays here: "I think it's impossible, in an hour of television, to not have pieces of who I am as an individual show up in Callie. We're both very organized. But Callie is serious. She's quiet."

And she's just as soon not see Callie get any love interests because, Procter says, it seems every time Callie does get one, "something tragic happens. It's terrible. Something always happens to my boyfriends. I am like, 'I don't want to have a boyfriend. I just wanna stay in the lab and wear the lab coat.' "