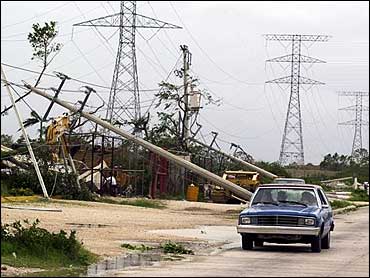 Hurricane Emily slammed into Mexico's Yucatan Peninsula on Monday as a powerful Category 4 storm, snapping concrete utility poles with its winds of 135 mph and punishing waves along the region's famous white-sand beaches.

The hotel is advising its guests to stay inside for now.

"Until we clean up the area, we recommend them to be in the room, take a rest," he said.

No deaths were immediately reported from the storm's landfall. Emily earlier was blamed for four deaths in Jamaica, and two helicopter pilots were killed Sunday while attempting to evacuate an oil rig off the Mexican coast in high winds.

The hurricane knocked out power and phone service to much of Mexico's famous Riviera Maya coastline, where thousands of residents and tourists rode out the storm in sweltering, makeshift shelters set up in schools and hotel ballrooms.

Although Emily weakened to a Category 1 hurricane while crossing the peninsula, it was expected to strengthen again over the Gulf later Monday.

By 2 p.m. EDT, winds had decreased to 75 mph, with the hurricane moving west-northwest at about 17 mph in the cooler waters north of the peninsula.

But Emily was expected to reach the warmer currents of the western Gulf of Mexico later Monday, picking up strength and hitting the northeastern coast of Mexico "as a major hurricane" as early as Tuesday night, forecasters said.

In Cancun, hundreds of buses moved more than 25,000 people — mostly tourists — to temporary shelters on Sunday, evacuating them from hotels and low-lying seaside neighborhoods in Cancun being battered by strong waves.

They were among the nearly 60,000 tourists being evacuated statewide from resorts like Tulum, Playa de Carmen and Cozumel, an island famous for its diving. Cancun's airport closed Sunday after thousands lined up at ticket counters, trying to get flights out before the storm hit.

Power was knocked out all along the coast, as Emily's winds snapped concrete utility poles along a half-mile stretch of highway between Playa del Carmen and Cancun. Ground floor windows were shattered in most businesses in Playa del Carmen, and residents waded through knee-deep water along some streets.

Mexico's state-owned oil company said Sunday that two pilots were killed in the Gulf of Mexico when their helicopter was downed by strong winds as they tried to land on an offshore oil rig to evacuate workers.

The aircraft was part of a fleet of 15 ships and 26 helicopters working to transfer 15,500 oil workers to shore. The platform evacuations closed 63 wells and halted the production of 480,000 barrels of oil per day.

By late afternoon Sunday, heavy winds tugged at palm trees and sent the last people at the beach running for their cars. Billboards were toppled by the storm.

Christopher Espinoza, a Cancun resident, braved howling bursts of wind to look out over the angry waves pounding the Cancun seafront. "The waves are already starting to take away part of the beach," he said.

Beach erosion has long been a problem for Cancun, and waves were starting to lap almost at the doorsteps of some hotels.

Cancun's last big evacuation was for Hurricane Gilbert, which killed some 300 people in Mexico and the Caribbean in 1988. But the city and surrounding resort areas had only about 8,000 hotel rooms then. That number has since grown to over 50,000.

"Back in the days of Gilbert, we didn't have prevention or prediction," said Cancun hotel worker Eduardo Gomez. "By the time we heard it was coming, it was already on top of us."

On the island of Cozumel, just south of Cancun, tourists in beach-side hotels were moved to accommodations closer to the center of the island. Authorities said they had enough food ready to feed 60,000 to 70,000 people.

"That's what the army is for," Fox said.