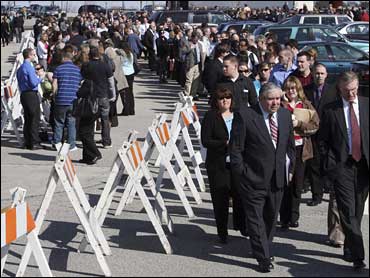 Despite predictions the Great Recession is running out of steam, the House is taking up emergency legislation this week to help the millions of Americans who see no immediate end to their economic miseries.

A bill offered by Rep. Jim McDermott, D-Wash., and expected to pass easily would provide 13 weeks of extended unemployment benefits for more than 300,000 jobless people who live in states with unemployment rates of at least 8.5 percent and who are scheduled to run out of benefits by the end of September.

The 13-week extension would supplement the 26 weeks of benefits most states offer and the federally funded extensions of up to 53 weeks that Congress approved in legislation last year and in the stimulus bill enacted last February.

People from North Carolina to California "have been calling my office to tell me they still cannot find work a year or more after becoming unemployed, and they need some additional help to keep their heads above water," McDermott said.

Critics of unemployment insurance argue that it can be a disincentive to looking for work, and that extending benefits at a time the economy is showing signs of recovery could be counterproductive.

But this recession has been particularly pernicious to the job market, others say.

Some 5 million people, about one-third of those on the unemployment list, have been without a job for six months or more, a record since data started being recorded in 1948, according to the research and advocacy group National Employment Law Project.

"It smashes any other figure we have ever seen. It is an unthinkable number," said Andrew Stettner, NELP's deputy director. He said there are currently about six jobless people for every job opening, so it's unlikely people are purposefully living off unemployment insurance while waiting for something better to come along.

The current state unemployment check is about $300 a month, supplemented by $25 included in the stimulus act.

That doesn't go very far when a loaf of bread can cost $2.79 and a gallon of milk $2.72, Senate Finance Committee Chairman Max Baucus, D-Mont., said at a hearing last week on the unemployment insurance issue.

"We need to keep our unemployed neighbors from falling into poverty. We need to figure out how best to make our safety net work," Baucus said.

The jobless rate currently stands at 9.7 percent and is likely to hover above 10 percent for much of 2010. Gary Burtless, a senior fellow at the Brookings Institution, said at the Finance Committee hearing that, according to Labor Department figures, 51 percent of unemployment insurance claimants exhausted their regular benefits in July, the highest rate ever.

"It is likely the exhaustion rate will continue to increase in coming months" as the unemployment rate continues to rise, he said.

Stettner predicted that Congress will likely have to continue extending jobless benefits through 2011.

McDermott in July introduced a more ambitious bill that would have extended through 2010 the compensation programs included in the stimulus act. Those benefits are now scheduled to expire at the end of this year.

But with a price tag of up to $70 billion, that bill would have been far more difficult to pass. McDermott instead decided to offer the scaled-down 13-week extension to meet the urgent needs of those seeing their benefits disappear this year.

McDermott said his bill would not add to the deficit because it would extend for a year a federal unemployment tax of $14 per employee per year that employers have been paying for more than 30 years. It would also require better reporting on newly hired employees to reduce unemployment insurance overpayments.

Three-fourths of the 400,000 workers projected to exhaust their benefits this month live in high unemployment states that would qualify for the additional 13 weeks of benefits under his bill, McDermott said.

Other states could qualify for more benefits if their unemployment rates are approaching the 8.5 percent threshold.