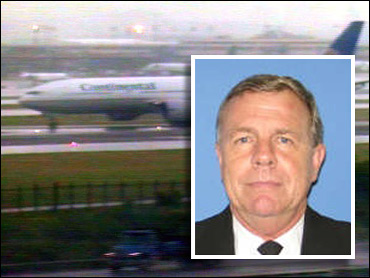 The pilot of a Continental Airlines flight from Brussels to Newark died over the Atlantic Ocean on Thursday, but the jet landed safely with two co-pilots at the controls.

The 247 passengers aboard Flight 61 weren't told of the pilot's death and flight attendants continued serving snacks, though the crew did ask for the help of any doctors aboard. Several passengers approached the cockpit, including one doctor who told The Associated Press the pilot appeared to have suffered a heart attack.

The 60-year-old Newark-based pilot, who worked for Continental for 32 years, is believed to have died of natural causes, said Kelly Cripe, a spokeswoman for the Houston-based airline.

CBS News has learned the company's website lists the captain of Flight 61 as a Craig Lenell. Continental responded: "At the request of the family Continental airlines will not confirm or deny the name of the pilot at this time."

Lenell had no known health problems, according to his wife. Lynda Lenell told CBS affiliate KHOU in Houston that her husband "was in perfect health" and had no known heart condition. She said he was given standard physicals every six months.

Lynda Lenell said the co-pilots thought her husband had fallen asleep during the flight, but they couldn't wake him up. That's when they realized something was wrong and called for a doctor.

A relief pilot was on board and took the place of the deceased pilot, Cripe said. The Boeing 777 touched down on time just before noon at Newark Liberty International Airport.

"The flight continued safely with two pilots at the controls," Cripe said in a statement.

Dr. Julien Struyven, 72, a cardiologist and radiologist from Brussels who was aboard, responded to the call for doctors, went to the cockpit and examined the pilot.

"He was not alive," Struyven said. There was "no chance at all" of saving him, he said.

Struyven said he suspected the pilot had a heart attack. He said he used a defibrillator to try to revive the pilot, but it was too late.

Pilots used to have to give up their wings before they turn 60, but two years ago, international regulations changed, upping the mandatory retirement age to 65, reports CBS News correspondent Priya David. On both international and domestic flights, if the pilot in command is over 60, the co-pilot must be younger than 60.

Former airline pilot and aviation expert John Cox told David that all pilots are monitored by FAA-certified physicians - pilots under 40 get a physical once a year; those over 40, every 6 months.

"I think the change of the rule to allow pilots to fly to age 65 does not have any safety implications at all," Cox said.

Of the 24 instances in the past three decades in which a member of the flight crew fell ill during a domestic flight, National Transportation Safety Board documents show none of the pilots were over 60 years old and no one died, reports David.

A first class passenger told CBS News that he had no idea the pilot had died until he got off the plane, saying that there had been no announcement and no commotion prior to landing.

"All we heard was that they needed a doctor on board the plane, the doctor went to the front of the plane, and that's the last we heard," passenger Rich Eskew of Staten Island, N.Y., told CBS News. "Very professional crew, everything was very calm."

Tom Donaldson, a former leader of the Continental pilots' union who currently flies Boeing 767 jets for the airline, said pilots must pass an extensive physical every six months to remain qualified to fly. The exam includes an electrocardiogram, blood pressure check and an eye test.

Martha Love, a passenger from Greenwich, N.J., who was sitting in the first row of the plane, said passengers weren't told exactly what was going on.

"No one knew," she said. She only became concerned after the plane landed, when she saw fire trucks and emergency vehicles lined up along the runway.

Simon Shapiro, a passenger from New York City's Brooklyn borough, was also unaware of the drama.

"I didn't hear anything or see anything," Shapiro said. "I was wondering why there were so many cops."

As a precaution, the airport's emergency crews were sent to meet the plane.

Passenger Kathleen Ledger, 45, of Bethlehem, Pa., said she learned about what happened when her cell phone rang after the plane landed.

"My husband called me and told me," she said.

She said she was impressed with the way the flight crew handled themselves - including serving snacks during the crisis - and doesn't think passengers should have been informed of the death during the flight.

"They did an incredible job," she said. "I would have done the exact same thing."

Donaldson said a third pilot is on board for long trans-Atlantic flights in case the captain or first officer becomes tired. He said there is no specific training on how to react when a crew member becomes incapacitated, but either member of a two-pilot crew can fly the plane.

"Clearly you want another set of eyes watching when you're going down a checklist, but you're capable of flying the airplane yourself," he said. "You can put the gears down, put the flaps down and carry out your other duties by yourself in an emergency."

The Lenells have six children and an unknown number of grandchildren.

"He was the kindest, gentlest man I've ever known. He would do anything for anyone," Lynda Lenell told KHOU. "He called me yesterday from Brussels to tell me he was bringing home some chocolate."

Lenell said her husband was an Air Force pilot who served in Vietnam.

"Flying was his life," she said. "He died doing what made him happiest."

In 32 years of flying for Continental, Lenell said her husband never missed a day of work until 2007 when his appendix burst.