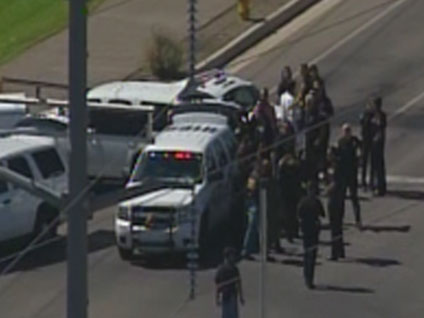 ALBUQUERQUE, N.M. (CBS/KRQE) The rapid police response and brave actions of Emcore Corp. employees are being credited with limiting the tragedy as a gunman swept into the Albuquerque business Monday.

Police blamed the shootings that left three dead and four wounded on an ongoing domestic and custody dispute involving Robert Reza, 37, a former Emcore employee, and his ex-girlfriend, who still worked at the manufacturer of fiber optics and photovoltaic products in southeast Albuquerque.

At a news conference Monday evening Albuquerque Police Department Chief Ray Schultz said Reza knew his ex-girlfriend's routine and met her on the Emcore campus shortly before 9:30 a.m. He shot her and another person outside the building killing the other person, Schultz said.

The woman, whose name has not been released, is in critical condition at University of New Mexico Hospital, he added.

Police were on the scene and entering the building within minutes of the first 911 call, which apparently drove Reza into an interior room where he shot himself to death, Schultz said. By then he had shot and killed a second person and wounded three others.

At the request of the families none of the victim's names will be released until sometime Tuesday, Schultz said.

During the shooting Emcore employees and delivery people fled the area, some of them taking refuge at Kirtland Air Force base next to the Emcore campus. Other employees helped shepherd colleagues into rooms while some aided the wounded.

"One thing here during the firing is a lot of heroic actions by employees of the building helping wounded employees, helping employees get to safe locations with the building," Schultz said.

The first five officers on the scene formed an active-shooter response team focused on isolating the gunman letting the second wave of officers remove victims from the scene.

"I'm convinced what was already a tragedy was kept from being worse," Albuquerque Mayor Richard J. Berry said during the evening news conference.

During the afternoon Albuquerque officers aided by New Mexico State Police, Bernalillo County sheriff's officers and the FBI interviewed more than 220 witnesses who had been transported from the scene to a nearby community center. About 700 people work in three buildings on the Emcore campus.

Investigators talking to witnesses and reviewing surveillance video quickly confirmed Reza was acting alone. He was armed with a handgun and reloaded at least once while firing more than 20 shots, Schultz said.

The only criminal record on Reza shows arrests for drunken driving about 10 years and 7 years ago, the chief added.

Reza apparently had been living in Albuquerque after separating from the girlfriend with whom he had two children. The children were found safe at a resident in Rio Rancho.

Police were waiting on a search warrant before entering his Albuquerque home and were beginning to interview people who knew the couple and might be able to outline the events of the last two weeks.

Schultz said the ex-girlfriend had told friends there was an ongoing domestic-violence situation she was planning to report to law enforcement. The also were issues over the custody of the children, he added.

Crime scene investigators were expected to be processing evidence until at least midnight as they worked inward from the initial shooting outside Emcore's Building 2. Reza's body was still in the building, Schultz said.

Emcore Chief Operating Officer Chris Larocca told reporters Reza had not been able to enter the secure area of the building.

"We haven't dealt with anything of this nature," Larocca said. "We're very proud of our employees. They did a phenomenal job."