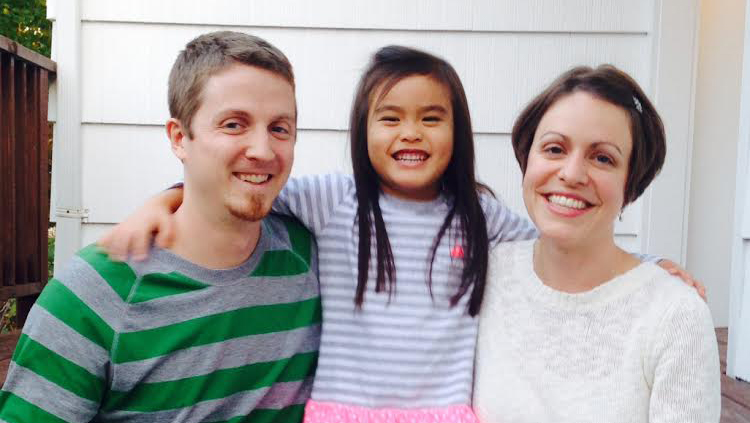 When Stephanie and Ben Hawkins found out that they could not have biological children, they decided to adopt. But unlike many other couples, the Hawkinses, who live in western New York state, adopted their daughter Annika before she was born, in a process called embryo adoption.

Embryo adoption, also known by the more formal term of embryo donation, allows people to legally adopt unused embryos that are left over from someone else's in vitro fertilization (IVF) procedure. The embryos are then transferred to the adopting mother's uterus so that she can carry and give birth to the child.

"People sometimes have that question when you have adopted a child -- whether through embryo adoption or some other form of adoption -- 'Do you feel differently about that child?' And the answer is 'no,'" Stephanie Hawkins told CBS News. "That's your child. She is my daughter."

Annika's arrival in 2009 came about as a result of modern medical technology and some of its unintended consequences.

When a couple undergoes in vitro fertilization and is left with more embryos than they need, they are given three options: either to have the remaining embryos destroyed, donate them to science, or donate them to another couple that will adopt them in a process that is legally similar to the traditional adoption of a child that's already born.

For prospective parents, the process has the added benefit of being less costly than alternatives like fertility treatments or a traditional infant adoption.

When Gina Yasuda, the Hawaii-based embryo donor for the Hawkins family, decided to donate her three extra embryos in 2002, she was driven by her beliefs. "Because of my Christian faith, I knew I couldn't trash them or donate them to science," she told CBS News. While she felt good about her decision, some of her relatives found it controversial.

"I have family members and friends that question me: "How could you do that? That's your child'," she said. But she still chose to go through with it.

Yasuda's doctors told her about Nightlight Christian Adoptions' Snowflakes Embryo Adoption program, which has coordinated more than 500 embryo adoptions since 1997. The resulting children are sometimes referred to as snowflake babies.

Yasuda and her husband contacted the agency, created a profile, and then started reviewing profiles of families that applied to adopt her three embryos. When they came across Stephanie and Ben Hawkins' profile, they realized they'd found the right match.

"We just saw their profile, and, to be honest with you, we really wanted to pick someone who was closer to Hawaii, but for some reason the Hawkins profile, it just grabbed me," Yasuda said. "I don't know how to explain it, but everything about them felt right."

Shortly after that, the adoption program director emailed the Hawkins family and her message was "pretty ecstatic," Stephanie said. "And she said 'You're not gonna believe this -- this family has been looking for three years for a family that they wanted to place embryos with and they think you're the one,'" Stephanie said.

The donated embryos remain frozen until the adopting mother is ready for the embryo transfer. In the Hawkins' case, that day came in August 2008. The embryos are then thawed before getting transferred to the woman's body.

About 50 percent of donated embryos typically survive being thawed, but, in the case of the Hawkins family, all three survived, Stephanie said.

Her doctor advised that she get all three embryos transferred, as usually only one-third of them can survive in the uterus. "We could have had triplets," Stephanie said. But the doctor eventually informed the couple that there was one baby growing in Stephanie's womb.

Stephanie and Ben still remember the mixture of feelings they experienced when they got the news.

"Of course we were excited that the pregnancy was continuing, but also it took us by surprise that we were also very sad that we had lost two babies," Stephanie said. "They weren't alive anymore."

"You adopt these embryos, and you feel like you are adopting babies -- they are yours now. I knew that they were alive going into me," she said.

Stephanie's pregnancy went well, and, in May 2009, Annika was born.

"As soon as she gave birth, Stephanie told Snowflake that she wanted to have direct contact so that was a blessing to me," Yasuda said.

Since then, the two families have been communicating with each other on a regular basis, exchanging emails with updates and photos.

Moreover, when Annika was 2 years old, Yasuda and her family came to visit the Hawkins family to meet Annika in person.

"It felt good and, most importantly, it felt right," Yasuda said about the memorable visit. "Everybody is where they are supposed to be. Annika is where she is supposed to be. Those are her parents."

Annika is now 5 1/2 years old and her parents describe the joy she's brought into their lives.

"She's a social butterfly," and she enjoys being around people, Ben said. "She's very bubbly."

"She is very outgoing. She's not really afraid of anything," Stephanie added.

"We can't imagine not having done embryo adoption and not having her," she said.