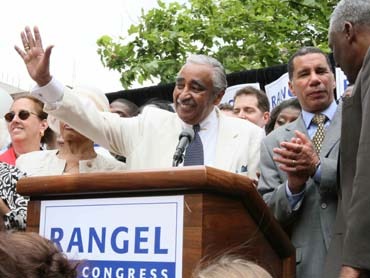 Rep. Charles Rangel (D - NY.) may be under fire for potential ethics violations, but that hasn't kept him from risking further alienating the White House.

Over the weekend, Rangel blasted President Obama for his commitment to the war in Iraq, arguing that his motivation for U.S. involvement in the war matched that of the previous administration - to secure more oil for the United States.

"I challenge anyone to tell me we aren't there because of the oil," Rangel told the Daily News. "The lack of an honest explanation [for the war] is consistent with Bush and Cheney."

Rangel's comments came just a day before he formally announced that he would be seeking reelection despite facing charges of tax evasion and raising funds improperly. Republicans will likely continue to point to the charges to hammer Democrats in the run-up to the midterm elections.

Rangel. 79, is an institution in his Harlem district, but the ethics questions have left the doors open to potential challengers in his reelection bid. (They also meant him giving up his chairmanship of the powerful House Ways and Means Committee.) Already in the race for the Democratic nomination are Assemblyman Adam Clayton Powell IV and former aide Vince Morgan. Yet according to the New York Times, Rangel continues to receive support from constituents who don't want to see his 20-year career end on such a sour note.

Jackie Rowe Adams, 62, a Parks Department employee who grew up in Harlem told the Times, "When it's time for him to go he will make that decision. He'll leave gracefully. [But] that time, is not now."

Rangel's fate may lie with the House Ethics Committee investigation. Democratic strategists believe that if the committee releases evidence against Rangel prior to the September 14th Democratic primary, he could suffer a defeat. But if he is cleared or if the investigation continues past the primaries, there is strong likelihood that he could win his seat for the 21st time.

Democrats do not want to give ammunition to Republicans all-too-eager to cast them as practicing Washington politics as usual.

If Rangel is cleared, "it would let everyone say that this is a cover-up, that it's just the same old [ethics] system," a Democrat close to party leaders told Politico.

"It would give the appearance that nothing has changed" despite the Democratic takeover in 2006, the Democrat added.