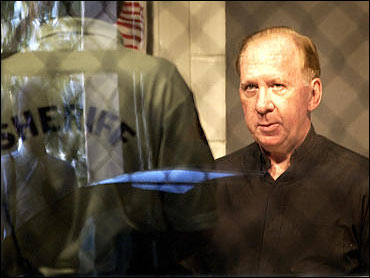 Pope John Paul II accepted the resignation Wednesday of Bishop Thomas O'Brien of Phoenix, who has been charged with leaving the scene of a fatal accident.

O'Brien, 67, was booked Monday and subsequently released after posting $45,000 in bail, and declined to answer any questions as he passed reporters outside the jail.

In the hit-and-run case Saturday night, 43-year-old Jim Reed died after he was struck while walking across a street in the middle of the block about three miles from the bishop's home.

The Vatican didn't give a specific reason for O'Brien's decision to resign.

In a two-line announcement, it said the pope had accepted O'Brien's resignation as the spiritual leader of Arizona's 430,000 Catholics under a clause of Church law allowing a cleric to resign for illness or "some other grave reason" that makes him "unsuited for the fulfillment of his office."

O'Brien also made headlines earlier this month when it was announced that he relinquished some of his authority in an unprecedented agreement with prosecutors that spared him from indictment on obstruction charges for protecting child-molesting priests.

The head of Phoenix Catholics becomes the second bishop to leave office this year. Boston's Cardinal Bernard Law left office in December after a similar sexual misconduct scandal involving priests under his authority.

O'Brien has declined to comment on the hit-and-run case. On Tuesday night, O'Brien's nephew, Jim Dearing, read a statement in front of the bishop's house expressing the family's sympathy for Reed's family.

"We are so sorry for their pain and loss," the statement said. "This is a horrible tragedy for everyone — the Reed family, our family, the bishop and the entire Catholic community."

O'Brien was charged with a class four felony for leaving the scene of a serious accident. He could be sentenced to anything from probation to less than four years in prison if convicted. There will be a hearing in the case next week.

CBS News Correspondent Vince Gonzales reports the bishop initially told police he was driving in the area after Saturday Night mass and may have hit something. Authorities say he never reported the incident, and once he learned that investigators were looking for his car, he apparently tried to have the damaged vehicle fixed.

Sgt. Randy Force, a police spokesman, said O'Brien has not being charged with causing the accident because the victim had been jaywalking.

"If the bishop had remained at the scene, in all likelihood he would not have been charged with any crime," Force said.

Now, additional charges are possible. Authorities will be looking into O'Brien's activities in the hours before Saturday's fatal accident.

Maricopa County Attorney Rick Romley said that while the length of time between the accident and O'Brien's arrest precluded standard sobriety tests, "There are some things that we can do."

He said investigators will question people who saw O'Brien earlier in the day, when he's said to have attended several confirmations.

Romley said contrary to early reports, it is not clear that a second car was involved in the accident. Because of the nature of the injuries, investigators believe that some time after the initial collision, a second car likely ran over the victim and dragged him.

Witnesses gave police a partial license plate number from the car, which led investigators to the diocese, Sgt. Laurie Williams said. The diocese told the police that it was O'Brien's car, she said.

Police went to the bishop's home with a search warrant and examined the car. The tan Buick's windshield was caved in on the passenger's side, Williams said. The warrant called for any evidence of blood, hair or glass samples, Williams said.

The court documents say that O'Brien had driven the car to Mass on Sunday and to visit his sister in Scottsdale. He had also made a call about having the windshield fixed, police said.

O'Brien has been a priest since 1961 and spent his entire career in Arizona. He has served in Phoenix since 1964, starting as a parish priest and quickly climbing the ladder of diocesan authority to become the spiritual leader of 430,000 Catholics in Arizona in 1981.

In the agreement with prosecutors announced earlier this month, O'Brien admitted that he allowed priests to work with minors after he knew of sexual misconduct allegations against them and that he transferred them to ministries without telling their new supervisors.

Under the deal, O'Brien agreed among other things to appoint the church equivalent of a chief of staff to supervise the enforcement of the church's sexual misconduct policies.

Prosecutors said neither the felony charge against O'Brien, nor his resignation, would affect the agreement. The Vatican hasn't publicly commented on the deal.