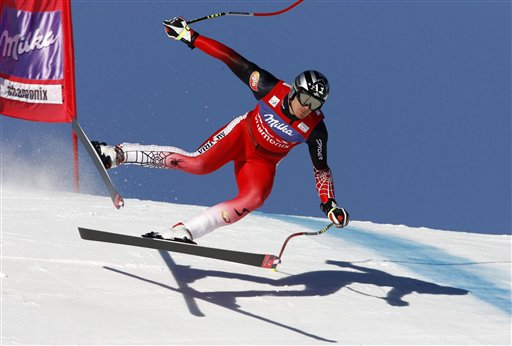 John Elway made history and the Denver Broncos stayed in pursuit of theirs.

Elway went over 50,000 yards passing for his career, joining Miami's Dan Marino as the only quarterbacks in NFL history to reach that plateau, and the Broncos (11-0) stayed perfect with a 40-14 victory over the Oakland Raiders on Sunday.

Elway, sidelined most of the previous two games with a rib injury, completed 17 of 25 passes for 197 yards and three touchdowns, raising his career passing total to 50,167 yards.

NFL rushing leader Terrell Davis ran for 162 yards on 31 carries and scored once, raising his season total to 1,492 yards, and the Broncos defense turned in three final-quarter interceptions, all converted into touchdowns.

The Broncos, becoming only the 10th team in NFL history to go 11-0 and aiming to match the 1972 Miami Dolphins as the only teams to go undefeated wire-to-wire, scored the last 23 points of the game against an Oakland defense that ranked second in the NFL.

The Raiders (7-4) made it interesting for a while. Without any timeouts, Donald Hollas drove his team 80 yards in the final minute of the first haf, capping the drive with a 29-yard TD pass to Rickey Dudley.

Hollas then threw a 14-yard scoring pass to James Jett, cutting Denver's lead to 17-14 late with 5:06 left in the third quarter.

But the Broncos responded with four scores.

Elway completed three passes and Davis had a 19-yard run, setting up Jason Elam's 23-yard field goal on the third play of the final quarter for a 20-14 lead.

Moments later, cornerback Ray Crockett intercepted a pass from Hollas, and Elway passed 28 yards to Rod Smith to make it 26-14.

Safety Tyrone Braxton, subbing for the injured Eric Brown, returned another interception 72 yards to the Oakland 3, and Vaughn Hebron scored on the next play.

"The Raiders really came back and made it a football game," Broncos coach Mike Shanahan said, "but we kept our poise."

"John was a little rusty early on, but he made the plays he needed to make in the second half. It's unbelievable to think what type of career you have to have to go over 50,000 yards."

The Raiders had allowed only two touchdowns in the fourth quarter all season, but Denver scored three. The Raiders also had been allowing only 259 yards per game, but Denver had nearly that many (253) in the first half alone and finished with 397.

"Turnovers obviously hurt us," Raiders coach Jon Gruden said. "They made opportunistic plays off our turnovers. Hollas did some good things, but sometimes we tried to make too many things happen."

"Denver is a heck of a football team. I've seen a lot of great backs, but this guy (Davis) is Superman right now. He's a hard guy to tackle. He's a finisher."

Elway threw a 7-yard touchdown pass to Shannon Sharpe and Davis ran 1 yard for another score as Denver took a 17-7 lead at intermission.

Elway, who came into the game needing 30 yards passing to reach 50,000, completed a 12-yarder to Willie Green on the game's first play from scrimmage. On Denver's second series, Elway passed 15 yards to Smith, then threw a 5-yarder to Green that moved him over 50,000. It led to Elam's 33-yard field goal.

Davis triggered an 80-yard scoring drive with a 20-yard run late in the period, and the Broncos resorted to some razzle-dazzle. Elway handed off to Smith on an apparent reverse to the right side, but Smith stopped and threw back to Elway on the left side for a 14-yard pass play. It was the third reception of Elway's career.

"Nothing surprises me about John Elway," Gruden said. "I've seen him punt. He can do it all."