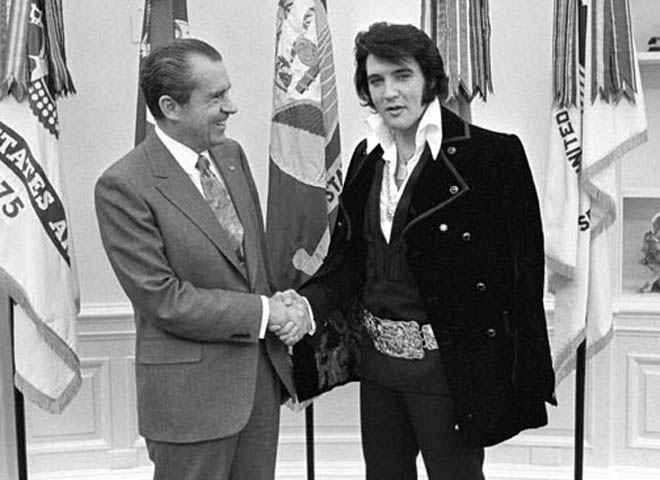 Today would have been the 80th birthday of perhaps the biggest name in music history: Elvis Presley.

From his humble beginnings in Tupelo, Mississippi, to his rock & roll megastardom to his death in 1977 at the age of 42, Presley lead a truly larger-than-life existence. And like many rock stars, he was not without his eccentricities.

Here are 10 facts you may not know about the late, great Elvis:

In 1935, Jesse Garon Presley was delivered stillborn just before his twin brother Elvis. Today, baby Jesse is buried along with Elvis and their parents, Vernon and Gladys, at Graceland.

According to Elvis' spiritual adviser and hair stylist, Larry Geller, Jesse's death weighed heavily on Elvis throughout his life.

The King never placed his blue suede shoes on a stage outside of North America, though he did perform five concerts in Canada in 1957.

Elvis set foot on British soil once, when the flight returning him to the United States from his military duty in Germany stopped to refuel at Glasgow Prestwick Airport.

3. Elvis was awarded an honorary badge by Richard Nixon

On December 21, 1970, Elvis met President Nixon at the White House (shown above) to offer his services in the government's war on drugs. The performer denounced The Beatles as being anti-American for their drug usage and told the president, "I'm on your side." He was awarded a narcotics agent badge.

According to the documentary "Monty Python: Almost the Truth," Elvis had watched "Monty Python and the Holy Grail" 45 times by the time he died. At one point he'd broken a finger: "Just a flesh wound," he said.

5. Elvis had a black belt in karate

Elvis took up martial arts while fulfilling his military duties in Germany in 1958. The musician was awarded his black belt before he returned to the United States in 1960, and his love of martial arts continued throughout his life.

6. Elvis' manager released a spoken-word album under his ownership

Colonel Tom Parker was Elvis' career-long manager and right-hand man, though many fans attribute the impresario with taking as much as half of the performer's wealth over the years.

In 1974, Parker released "Having Fun With Elvis on Stage," a live spoken-word album the he could personally profit off -- because RCA Records only owned the rights to Presley's music. Void of continuity or even comprehensibility, it is considered one of the worst rock & roll albums in history.

7. Elvis bought Graceland when he was 22

Under his ownership, Elvis made a few creative updates to the estate. He added music-themed iron entrance gates and a "jungle room" with an indoor waterfall and racquetball court. Also, after discovering that President Lyndon Johnson would watch all three network news programs at the same time, Elvis had a wall of built-in TVs installed in the home.

8. Elvis had a pet chimp

Move over Michael Jackson. Elvis was actually the first megastar to tote around a pet monkey. His chimp, named Scatter, previously belonged to a Memphis entertainer and would often be dressed in little outfits.

In 1964, Elvis paid $55,000 for the Potomac, the 165-foot-long boat that served as FDR's "floating White House" from 1936-1945. The ship had a series of owners before Elvis bought it and after the president's death. However, soon after purchasing, Elvis donated the vessel to St. Jude's Children's Hospital, which in turn sold it to raise money.

10. Elvis wore a cross, the Hebrew letter chai, and a star of David around his neck

"I don't want to miss out on heaven due to a technicality," he said.