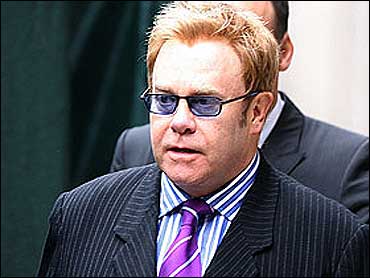 Elton John said Wednesday that he owns a photo of two naked girls taken by award-winning photographer Nan Goldin that was seized by police at a British gallery.

John confirmed ownership of "Klara and Edda Belly-Dancing" in a statement on his Web site. He said it is among 149 images comprising Goldin's "Thanksgiving" installation.

Northumbria police said the photo was taken from the BALTIC Center for Contemporary Art in Gateshead, northeastern England. They confirmed Tuesday that an image had been taken from an exhibit "to assess whether or not an offense had been committed."

Both Goldin and the gallery have declined to comment.

"The photograph exists as part of the installation as a whole and has been widely published and exhibited throughout the world," the 60-year-old rocker said.

"It can be found in the monograph of Ms. Goldin's works entitled 'The Devil's Playground' (Phaidon, 2003), has been offered for sale at Sotheby's New York in 2002 and 2004, and has previously been exhibited in Houston, London, Madrid, New York, Portugal, Warsaw and Zurich without any objections of which we are aware."

John purchased the "Thanksgiving" installation in 1999, his statement said.

In 2001, London police demanded that the Saatchi Gallery remove one of Goldin's photographs, saying it was indecent. The gallery refused, and officials later backed down, saying there was no realistic prospect of securing a conviction in the case.