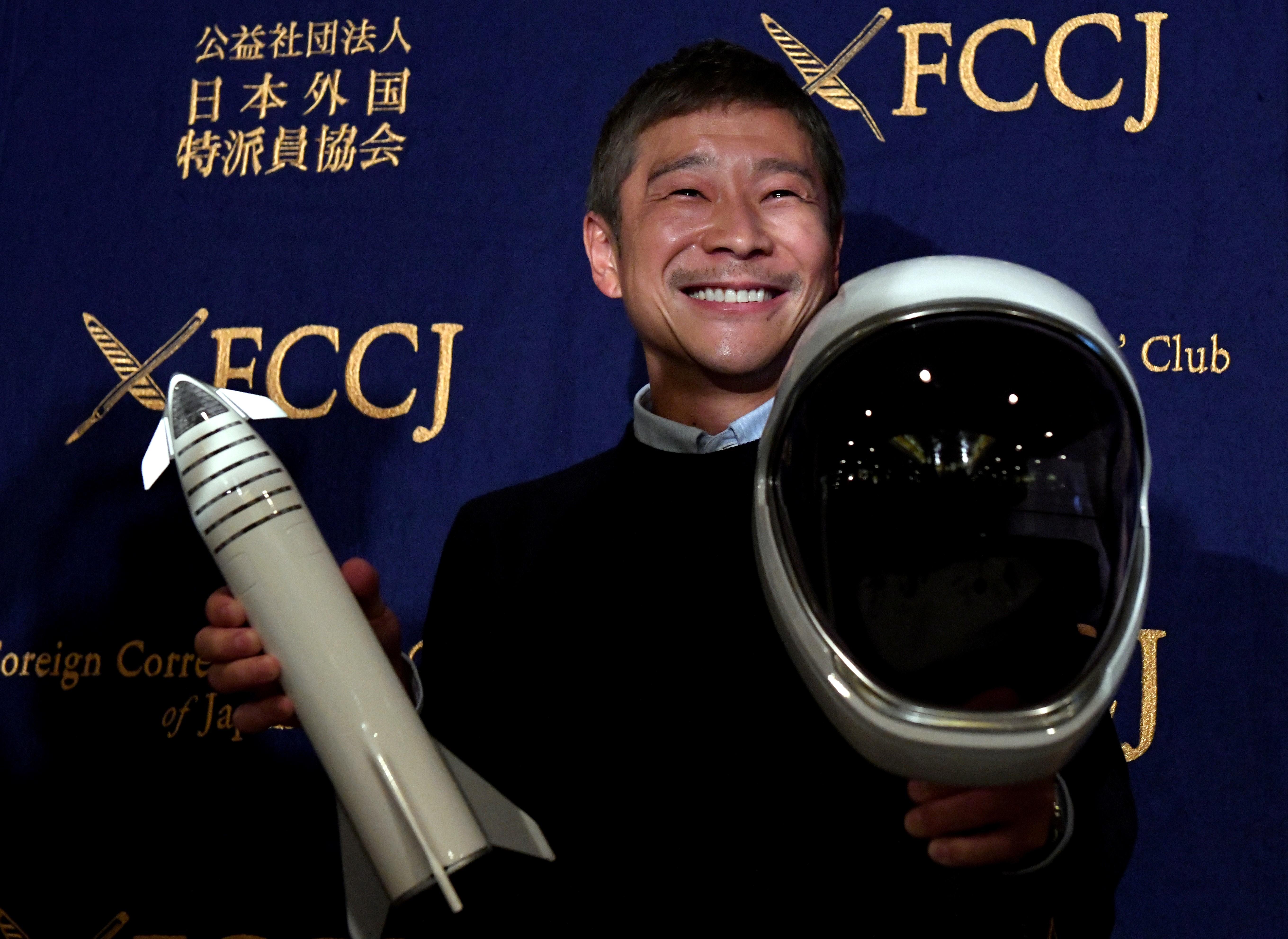 TOKYO -- The Japanese online retail tycoon who plans to travel to the moon on the SpaceX rocket says he respects and trusts Elon Musk as a fellow entrepreneur, despite his recent troubles. "Twitter can get you into trouble," Yusaku Maezawa, chief executive of Zozo Inc., said Tuesday at the Foreign Correspondents' Club in Tokyo. "And that can be said of Elon Musk, too."

Musk's tweet in August that declared he had secured financing for a Tesla buyout got him in trouble with the U.S. Securities and Exchange Commission. Under a settlement, Tesla and Musk each must pay a $20 million penalty. Musk also stepped down as Tesla's chairman.

Maezawa, 42, who is also quite active on social media, is set to be a passenger on Musk's SpaceX, the first-ever private commercial space trip, scheduled for blastoff in 2023, to orbit the moon, in what Maezawa has dubbed his "#dearMoon Project."

Maezawa said he got a good feel for Musk's character by visiting Tesla, and seeing the relationship Musk had developed with his employees.

"They believe in Elon Musk," he said. "That kind of company is marvelous. I felt that as another entrepreneur."

Although Maezawa said nothing was decided yet on who was going with him on the space travel, he said he wanted to take visual artists, fashion designers and musicians from a variety of backgrounds, including the actress he was dating, Ayame Goriki, "if she proves to be a good match for the mission."

Maezawa said his company has a twitter policy, and experts go over his tweets in advance. Sometimes he gets emotional on social media, but he is careful not to say anything that might hurt his company, he said.

Recently, he took to his twitter and Instagram accounts to lash out at online hecklers, who had ridiculed his halting rendition of "Twinkle, Twinkle Little Star" on an expensive Stradivarius violin he had just purchased.

Maezawa is known for lavish purchases, including artworks by Jean-Michel Basquiat and Andy Warhol. But he is equally known for sharing them with the public.

He shrugged off the possible dangers of space, just as he brushed off the risks of tweets and associations with Musk.

"There is no end if you start thinking about that," he said of the risks.

Maezawa said he has not yet started training for the mission, but he has been getting regular medical checkups and is brushing up on his English.

In a nation where people tend to be focused on blending in and getting along, Maezawa has stood out. Forbes magazine estimates his wealth at $2.9 billion.

Maezawa ran an import CD business and played in a rock band before he embarked on his online fashion business with his shopping site Zozotown.

Recently, he has begun making clothes, such as a wearable technology called Zozosuit. The suit, splattered with hundreds of dots, takes body measurements with a software application, ensuring a good fit.

The world remembers the first words of the 1969 Apollo astronaut Neil Armstrong, "That's one small step for a man, one giant leap for mankind," he said.

Maezawa has a message of his own that he says will be more casual, akin to the lyrics he loved playing in rock bands growing up.

All I want to say is this: Wouldn't the world be a better place if there is peace?" said Maezawa.