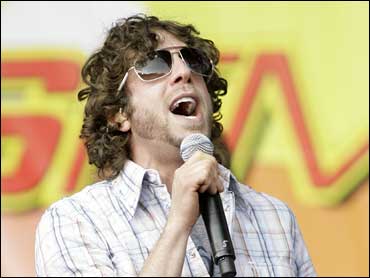 This story was written and reported by The Showbuzz's Caitlin Johnson.

Season six of "American Idol" is over, and 17-year-old Jordin Sparks emerged as the winner. But as the show becomes more firmly entrenched in American pop culture, one thing has become increasingly clear: you don't have to win to write your ticket to fame and fortune. Just look at non-winner Jennifer Hudson, who won an Oscar for "Dreamgirls," and Chris Daughtry, who is enjoying massive success with his new band Daughtry.

Elliott Yamin, who finished third on the fifth season of "Idol," hopes some of that magic rubs off on him. His self-titled album, released in March, has been doing well on the charts in the wake of Yamin's recent appearance on "Idol." His album was the No. 1-selling independent record as of May 24, according to Billboard, and his single was making strides on the Billboard Top 200, up from 80 to 31. In the hip hop/R&B category, his album jumped to 20 from 49. Yamin co-wrote most of the songs.

In fact, the success he's enjoying now is far beyond what he ever could have imagined while growing up in Virginia, working as everything from a part-time on-air personality on a radio station to a staffer at Footlocker.

"It's just the fact that I am out there promoting music I can call my own for a change," Yamin, who is currently on tour, told The Showbuzz. "It's such a surreal experience. It's an honor. It's amazing."

Now his face, recently retouched with new, flawless teeth, is recognized by millions of people, which is "trippy," Yamin said. He chocks it up to the power of TV.

"I am just blessed to be in a position that I am today, to be able to wake up every day and do what I love to do and to do what I feel I belong doing," the 28-year-old said. "I don't really have too many of my close friends that can honestly say they really love their job."

Considering all the health problems Yamin has endured, his career achievements are even more impressive. Yamin, who Simon Cowell called "American Idol's" best male vocalist so far, is actually 90 percent deaf in his right ear. He said he thinks he compensated for having extremely sensitive hearing in his good ear and also has a natural affinity for music.

"Music is something you feel first; feel it first and worry about hearing it later," he said.

Yamin was also diagnosed with juvenile diabetes when he was about to turn 16 — a time when his friends were getting new cars and having a great time being teenagers. He, on the other hand, was going to the hospital learning how to take insulin shots.

Juvenile diabetes is now his main cause. Yamin said that as soon as he realized he was a contender on "Idol" he wanted to use his newfound platform to work for kids who are going through the same thing he did. He has visited kids at the American Diabetes Association's summer camp in Pittsburgh and has raised money for the Richmond chapter of the ADA and the Juvenile Diabetes Research Foundation.

Life is definitely good for Yamin, who has been dating his model girlfriend Jamie Paetz for about a year and he said he sees good things ahead for Sparks.

"There hasn't been too many young winners, if any…she's gonna go very far," he said. "When I was that age, I was nowhere near, anywhere this stage or having the poise ... to handle stuff like this. My hat's off to her."