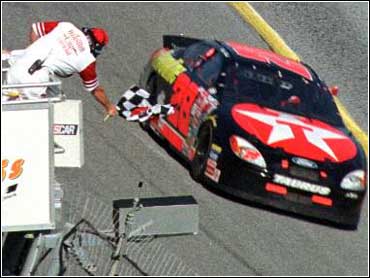 The only drivers who seemed to enjoy the two Daytona 500 qualifying races were Bill Elliott and Ricky Rudd.

And why not? They won.

Yet the 100 laps of racing offered little drama Thursday. There were no caution flags first time since 1964 that's happened and just one pass for the lead.

Tony Stewart and Robby Gordon even stayed away from each other on the track, a day after their scuffle in the garage area.

Elliott, a two-time Daytona 500 winner who had not won any kind of race since the Southern 500 in 1994, was never challenged in the first of two 125-mile qualifiers. From the outside of the front row, he passed Dale Jarrett at the very start and led a three-Ford breakaway, easily finishing ahead of Jarrett and Rusty Wallace.

Jarrett, who remains the favorite to win on Sunday, had dominated at Daytona International Speedway, winning time trials for the pole position in the main event and easily taking the Bud Shootout, a 25-lap race for last year's top qualifiers.

"The main objective today, especially for us, but for most of the guys, was to get 50 laps under our belts and see what was going to happen as the tire pressures got up and the fuel got out of the car," Jarrett said.

"The best way to do that is to stay in line and not get to dicing around."

In the second race, Rudd, Jarrett's new teammate, started from the pole and was untouchable, easily staying ahead of the Chevrolet Monte Carlo of runner-up Mike Skinner.

Earnhardt, Skinner's teammate, has won 12 Daytona qualifying races, including an unprecedented 10 in a row before Thursday. He started ninth, finished 11th and will start 21st in the 500.

He criticized NASCAR's new shock-absorber rule, which requires all of the Winston Cup teams to use the same shocks and springs and allows only minor adjustments.

"They took racing out of the hands of the drivers and the crews," Earnhardt said. "We can't adjust and make the cars drivlike we want. They just killed the racing at Daytona."

Elliott disagreed, saying he thought the first qualifier was interesting. Then again, his win put him in the No. 3 position for Sunday.

"The cars are so equal everybody's afraid to jump out until they get themselves in the right position," he said. "It's strategy."

The qualifiers did nothing to quiet the General Motors teams, who have insisted their redesigned Chevrolet Monte Carlos and the virtually unchanged Pontiac Grand Prixs are at an aerodynamic disadvantage to the partially redesigned Tauruses.

"It looked like a Ford show from where I was sitting," said Jeff Gordon, the defending Daytona winner, who finished sixth in the opener in a Monte Carlo.

Two-time Daytona winner Sterling Marlin finished 17th in the first race and will start 38th on Sunday in his Chevy. Felix Sabates, Marlin's team owner, said he doesn't have much hope of things getting better for the GM cars.

"If you go to a gunfight and guys have bazookas and you've got a wooden knife, that's not too good," Sabates said.

Wallace shrugged off the GM talk.

"It's all in the preparation and the way they handled the new shock rule and so forth," he said.

Told that the Chevrolet teams would like to get some aerodynamic help by having NASCAR allow them a rear sway bar, he said, "Well, I'm sure people in hell would like a glass of ice water, too."

Mike Helton, who heads the competition side of NASCAR, said there will be no changes to the aerodynamic or shock rules for the 500.

Jarrett and Rudd will start from the front row on Sunday, thanks to their qualifying laps last Saturday in the opening round of time trials.

Positions 3-30 went to the top 14 finishers excluding Jarrett and Rudd in the two qualifying races, with 31-36 filled by the fastest remaining drivers from the two rounds of time trials.

Six more positions went to drivers based on last year's team-owner points, with Darrell Waltrip getting the final spot in the 43-car field as a former series champion.

The younger Earnhardt, who made five Winston Cup starts in 1999, will begin his first Dayton 500 in eighth, just behind Stewart, last year's top rookie.

Stewart and Robby Gordon raced together in the first qualifier and there was no carryover from their shoving match Wednesday. The drivers, angry about a fender-bender on the track, avoided any punishment, but NASCAR did fine a Stewart crew member $2,000 for being too aggressive in breaking up the fight.

Among the 13 drivers who failed to make the 500 field were Dave Marcis, whose record string of 32 straight Daytona starts ended when he finished 17th in the second race.

Also heading home was 1986 Daytona 500 winner Geoff Bodine, who was 19th in the opener.