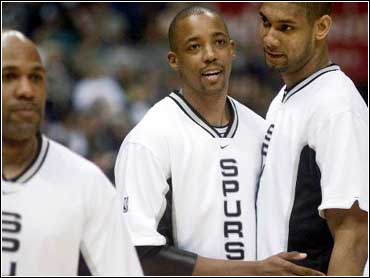 Sean Elliott, who helped the San Antonio Spurs win the world championship in 1999, is leaning toward returning for another season with the team, the San Antonio Express-News reported Wednesday.

The forward told the newspaper that he will return to San Antonio later this week and set up a meeting with Spurs management.

"Am I 99 percent sure I'll be back? Well, maybe not 99 percent but it's sure way up there," Elliott told the Express-News during a phone interview Tuesday about making a decision.

Elliott missed more than 60 games last season after recovering from a kidney transplant, but returned at the end of the season. He had not yet confirmed whether he'd return to the Spurs for another season.

Elliott, 32, just completed a week of practice at Pete Newell's Big Man camp in Hawaii and pronounced himself fit. He has said that he wouldn't have joined the camp if he hadn't planned to return.

"I feel better than I did four or five years ago," Elliott said. "Back when I was 29, 30, I felt old. I feel young, physically. Maybe this is the way you're supposed to feel when you're 32. I took a lot of hits; I was banged around a lot at (Newell's) camp. I played a lot of defense.

He discounted any idea that he would restrict himself to just 15 minutes or so a game.

"I'll be out there ready to play full time, a regular game," he said.

Elliott became the first professional athlete to return to play after receiving an organ transplant.

He said he last spoke to Coach Gregg Popovich before leaving for Hawaii, and that the coach was positive about the Spurs' 2000-01 chances.

"I figure they may still have caution in the backs of their minds," Elliott said. "I just want to make sure they want me back and are not thinking about my retiring."