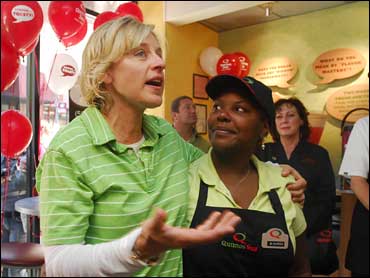 Talk show host Ellen Degeneres returned to her hometown for the first time since Hurricane Katrina to open a restaurant given away on her show to a New Orleans resident who lost her home and business.

Surrounded by cheering fans and chanting "Rebuild New Orleans! Rebuild New Orleans!" into a bullhorn in front of a Quiznos, Degeneres officially opened the sandwich shop given to Sharon "Shay" Karriem, whose home and grocery store were inundated with floodwater when Katrina hit last summer.

Karriem cried when Degeneres unveiled a large picture of the two of them, which the talk show host hung on an inside wall of the restaurant.

Since Katrina, Degeneres has been outspoken about her frustration with the slow pace of recovery. She collected nearly $10 million from individual and corporate sponsors for the American Red Cross to help with relief efforts. Still, she said too little has been done.

"There is still no power," Degeneres said. "If this was Washington or San Francisco ... anywhere else, this wouldn't be happening."