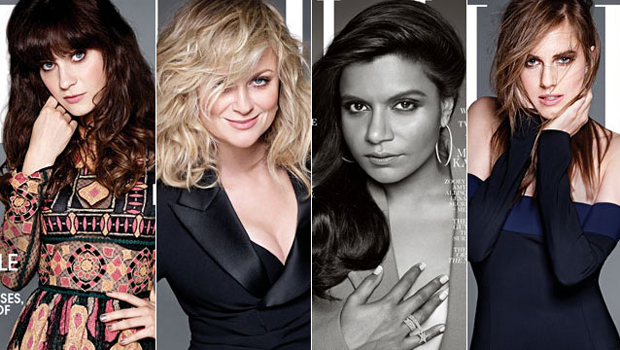 After Elle magazine previously came under fire for their November "Women in Hollywood" issue, in which they covered up actress Melissa McCarthy in an oversized coat while showing a lot more skin on the issue's other covers featuring leaner actresses including Reese Witherspoon, Shailene Woodley and Marion Cotillard, the publication is facing criticism yet again for their current cover of "The Mindy Project"'s Mindy Kaling.

Aside from Kaling's cover being the only one in black-and-white, the 34-year-old's photo was also shot as a close-up, while the other three actresses show off more of their physique due to the three-quarter length treatment they're given.

Kaling has previously discussed her weight, proudly revealing that she's a size 8.

"Since I am not model-skinny, but also not super-fat and fabulously owning my hugeness, I fall into that nebulous, 'Normal American Woman Size' that legions of fashion stylists detest. For the record, I'm a size 8 (this week, anyway)," she told NPR's "Morning Edition." "Many stylists hate that size because, I think, to them, I lack the self-discipline to be an aesthetic, or the sassy, confidence to be a total fatty hedonist. They're like, 'Pick a lane.'"

Elle just responded to the controversy, telling E! News, "Mindy looks sexy, beautiful and chic. We think it is a striking and sophisticated cover and are thrilled to celebrate her in our Women in TV Issue."

Aside from McCarthy's "Jacket Gate" and Kaling's close-up, this isn't the first time Elle has got into hot water over their cover choices. The publication was accused of lightening "Precious" actress Gabourey Sidibe's skin color for the cover of its 25th anniversary issue in 2010, and some readers questioned why the cover was cropped close while the other three covers -- featuring Lauren Conrad, Amanda Seyfried and Megan Fox -- were zoomed farther out, showing the women's bodies.

Kaling has since responded to the controversy with her trademark sense of humor.