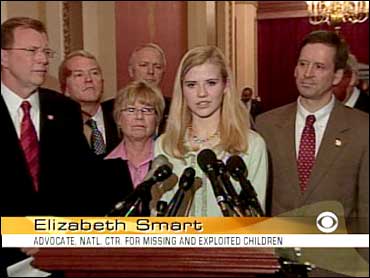 For the first time, Elizabeth Smart is lending her voice to those supporting sex predator legislation on Capitol Hill.

The Utah teen, who was kidnapped from her Salt Lake City home almost four years ago and held nine months by two suspects still awaiting trial, announced her support of a measure pending in the Senate that would strengthen laws meant to protect children from predators.

"We are here today because we care about people and what happens to others," Smart told a news conference. "I don't want to see others go through what I had to go through."

"More lives can be saved and potential tragedies avoided. We must do all we can to prevent trauma. I would ask and call on both the Congress and Senate to quickly pass this bill on behalf of the next victim."

Smart's father, Ed Smart, has been to Washington several times trying to persuade lawmakers to make toughen laws designed to protect kids from kidnapping or other forms of abuse, but this was Smart's initial foray along those lines.

According to Salt Lake City's Deseret Morning News, the Children's Safety and Violent Crimes Reduction Act, which has already passed the House, "ensures the sex offender registry is current and is verified regularly and requires states to notify each other when a registered offender moves to another state. The bill also requires background checks for teachers, extends sex offender registration requirements for crimes committed juvenile sex offenders and creates a national sex offender public Web site."

Robbie Callaway, of the National Centers for Missing and Exploited Children, called the bill "the strongest piece of child-protection legislation in the past 24 years."