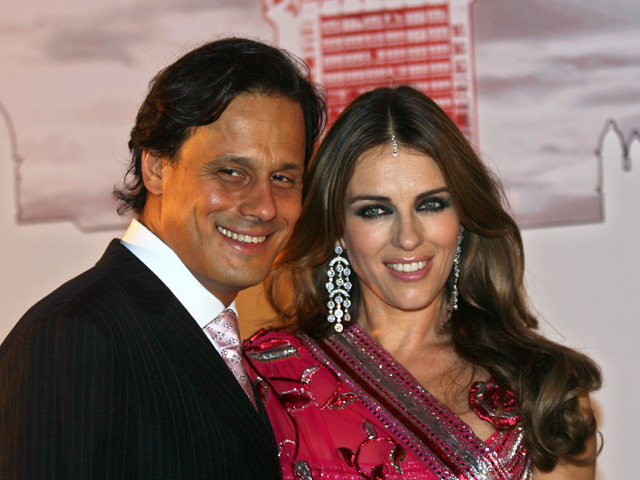 (CBS) Actress Elizabeth Hurley has reportedly filed for divorce from husband Arun Nayar, whom she married three years ago in elaborate ceremonies on two continents.

The two have been separated for several months. "Not a great day," Hurley tweeted in December. "For the record, my husband Arun & I separated a few months ago."

The separation reportedly occurred not long after Hurley was photographed kissing former cricketer Shane Warne. The Estee Lauder spokesperson and the cricket star have since been seen together repeatedly. Nayar, an Indian textile heir, is reportedly dating model Kim Johnson.

Hurley has one son, Damian Charles Hurley, from a previous relationship.

Hurley and Nayar were married in February of 2009 in a private civil ceremony at a 15th-century castle in the town of Winchcombe in western England, about 125 miles west of London. Guests included Elton John, Kate Moss and Hurley's ex, Hugh Grant.

The next week, the two had a traditional Indian wedding ceremony at Umaid Bhavan Palace, home of the former prince of Jodhpur. It was part of a two-day wedding celebration centered around the 11th-century Nagaur Fort, about 87 miles north of Jodhpur, in western India